The special marks his return to the spotlight a year and a half after sexual misconduct allegations surfaced about the 36-year-old comedian.

Ansari has stayed largely out of the spotlight since then, spending most of the year crisscrossing the world on a stand-up tour. 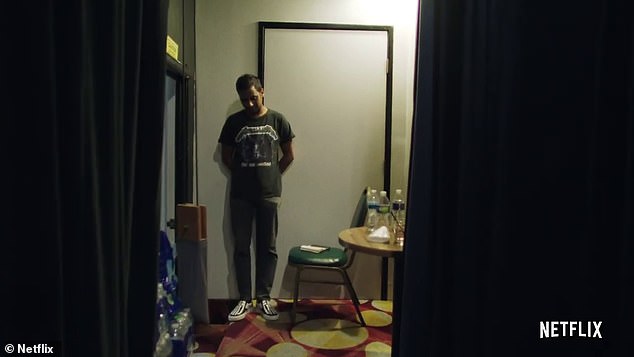 The trailer begins with a shot of Ansari standing in the middle of a small room, wearing a vintage Metallica Ride the Lightning t-shirt and jeans.

The comedian is seen glancing at a small notebook that is resting on a green chair next to him, while the trailer reveals this special is directed by Spike Jonze (Her).

He’s seen hanging out in that room before his show, while a number of quotes from critics are shown in the trailer.

The trailer even shows candid moments like Ansari reaching under his shirt to put on deodorant before a show, smiling at the camera as he does so.

The trailer doesn’t show any of his actual performance, but it does show the audience reacting to Ansari taking the stage.

The trailer also shows Ansari taking his final bows at the end of a performance before the title card and July 9 release date is revealed.

The special marks Ansari’s return to Netflix, where his hit comedy series Master of None aired for two seasons in 2017 and 2018.

While the show wasn’t officially cancelled, Netflix revealed during a TCA panel in April 2019 (via Vulture) that they would be willing to make a third season when Ansari is ready.

‘We certainly have given some thought to it and would be happy to make another season of Master of None whenever Aziz is ready,’ said Cindy Holland, Netflix’s vice president of original series.

Netflix set to loose “The Office” and “Friends” in the future

First ever picture of Babu Owino after B Club shooting

Picture of the gun suspected to have been used by Babu...

‘There was confrontation between Babu’s bouncers and I’ Close friend to...

Pictures of the DJ Evolve, man shot by Babu Owino early this morning