The event was thrown by Where Art Can Occur (WACO), an organization founded by Beyonce’s mother Tina Lawson and stepfather Richard Lawson.

In a photo posted by an Instagram fan account, Beyonce could be seen mingling with her fellow guests inside the star-studded event. 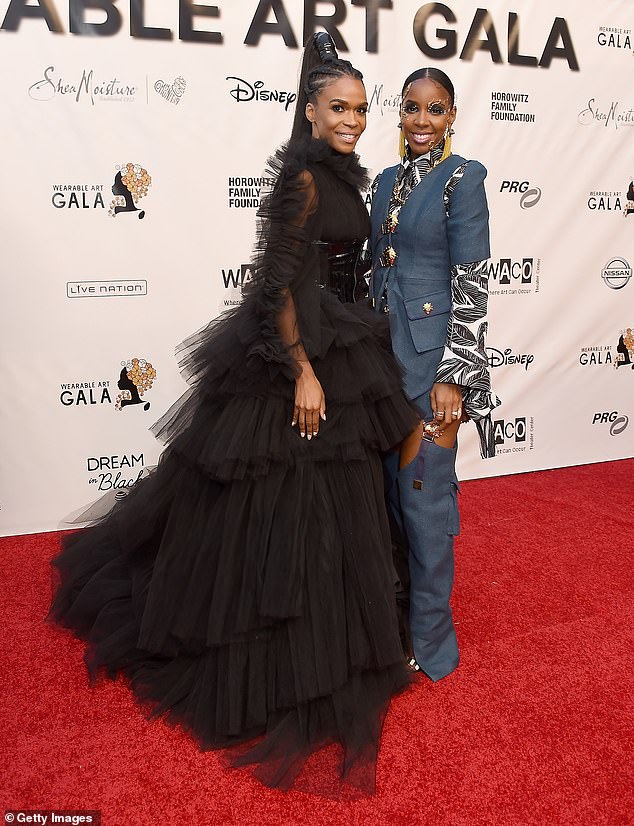 Kelly was smashing in a blue short-sleeved blazer that fell almost to her knees and featured short sleeves.

Beneath the blazer she wore a monochrome top with a swirling pattern and flared out cuffs, adding a splash of contrast to the ensemble.

Her look was decorated with metallic accents, complementing her luxurious drop earrings and necklace as she posed on the red carpet.

Kelly slipped into a pair of split legwarmers and short shorts that matched her blazer, rounding off the look with black and white striped heels.

She glowed with happiness as she posed alongside MIchelle, who had swept her hair up into a high ponytail and clipped it for the event.

Michelle’s ultra-glam look featured a long train at the back and a dangerously high slit up the front, allowing her to show off her shapely legs.

The extravagantly frilly black ensemble had a triple-tiered skirt and an elegant cowl, as well as a shiny corset that emphasized her trim figure.

Tina, who shares Beyonce with her ex-husband Matthew Knowles, was a feathery sensation in a floor-length gown.

Meanwhile, her current husband, whom she married in 2015, went for medieval warrior-king chic, complete with tall headgear.

Feathers were something of a running theme that evening apparently, as Tiffany Haddish also opted for some plumage.

The Girls Trip star’s off-the-shoulder gown was covered in read feathers above the waist and black fur – possibly faux – below.

Tiffany was decked out in a black fuzzy circular headdress that resembled a halo as she posed up a storm on the red carpet.

Star Jones, the former co-hostess of The View, was beautiful in blue, wearing a textured floor-length gown with a flowing shawl.

Natural Beauties! A List Of Female Celebrities Who Would Still Look Great After Cutting Their Hair

‘My wife is not a gold digger!’ Bobb Muriithi defends wife...

‘Fight the thieves then!’ Kibe angered by Betty Kyallo saying she...