Jacque Maribe explains why she is 'blue ticking' you when you message her! 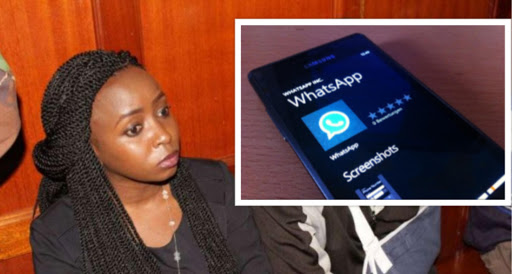 Jacque phone
Jacque Maribe through her lawyer Katwa Kigen has raised an issue with how prosecution is using her iPhone.

She says that once she surrender her phone to aid investigations into the murder of business woman Monicah Kimani, her pals have told her that they have received messages sent from her phone.

Jacque said that she has written three letters to the DPP and her lawyer has had several telephone conversations and exchanged messages with State lawyer Catherine Mwaniki, who is representing Mr Haji in the case.

She has also made multiple visits to their offices.

The journalist says none of her letters have been responded to, so there is no commitment on the part of the prosecution to hand her Toyota Allion car and her black iPhone.

In the application, she further claims that she has received information from the contacts in her phonebook that in the course of the withholding of the phone, they have received messages from her number.

"We had to 'left' her from various whatsapp groups in which she was in because we realised the messages were being read. And you know some of those groups have crazy stuff on there," our source said.

She also complains that the prosecution is yet to make any documents or materials likely to be used during the hearing of the case available.

“Unless the court intervenes, the DPP and the DCI will continue using the advantages of their public, statutory and constitutional advantages to despise and violate Ms Maribe,” Mr Kigen said.

Justice James Wakiaga allowed the Citizen TV journalist to access her house in Lang'ata. He will review the matter of having her car handed back to her.

Jacque’s application to have the DPP charged with contempt of court will be heard on February 28, 2019.