'If I die, I love the lord,' prays PR rep in 14 Riverside terror attack 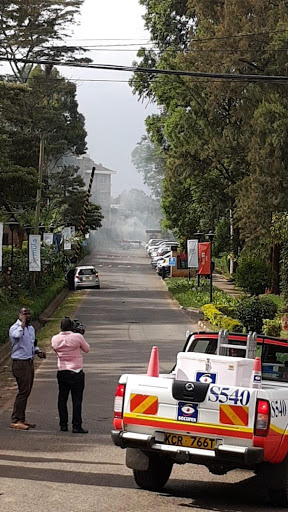 Kenyans are stunned by the unwarranted attack at 14 Riverside Drive.

According to reports reaching us, there are four gunmen holding people on the second floor of Dusit Hotel.

A spectator who witness the beginning of the attack spoke to narrating the ordeal.

Daniel Kiragu said, "We heard explosions and everyone was running, running, some were jumping over fences. The gunmen even shot some people at the entrance of the hotel."

Another Kenyan who has been caught in the attack narrated the ordeal.

UPDATE: He has however been rescued by security assets on the ground.

Ron Ng'eno, a PR practitioner took to twitter and sent out and SOS minutes after the attack took place.

"I am in 14 Riverside drive hiding in a bathroom and we are under attack."

Ron continued, "I am hiding in a bathroom room ************* terrorist are going room to room HELP @AfricaMediaHub @nytimes @BBCWorld @BBCBreaking."

As a parting shot, Ron prayed:

"If I die I love the Lord and believe I will go to heaven please tell my family I love then I love you Caleb, Mark and Carol."

Here are some photos from the scene of the car bombing.