Exclusive: 'I left EMB because my fiancée was disrespected and it hurt me' Mr Seed cries out 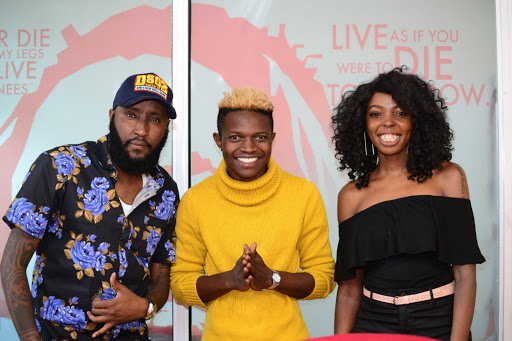 WhatsApp Image 2019-02-05 at 09.17.20
When Mr. Seed announced that he is no longer signed under Bahati’s EMB record label, rumors just begun spreading.

There were reports that the exit by Mr seed had a lot to do with an incident that took place on December 31, during Bahati’s New Year’s party.

Mr Seed was in the Kiss FM studios' Tuesday, where he joined Adelle and Shaffie on Breakfast with the stars and opened up about a lot. He admitted it had been a month since his exit from EMB Records and it was all because he felt it was time for him to move on, plus there arose serious misunderstandings.

management was good but they were not 100% I have worked with them for 2 years and I have grown. there were many misunderstandings. so for the sake of peace, i decided it's best I leave

As the rumors kept spreading, Mr Seed made it clear that their fight had nothing to do with money. He left because his woman was disrespected.

we have never fought over money. what ringtone has put out there, 99% of the stories are true. I left because my woman was disrespected. we were in a show in which devil came in. there was altercation and police came for my family

He cannot really explain what transpired for his baby mama to be chased out of the event. Before the event, he talked to Bahati and next thing we know, cops emerged to forcibly escort his fiancée out of the event.

I was talking to Bahati before it all happened then a few hours later, I get a call 'babe bouncer and police have come to bebea me.' I was backstage and she was at her stand as a vendor

after cops came, I went there and told them this is my pregnant wife. whoever has sent you let them come deal with me

According to Mr Seed, he had decided to let the story go but there were so many witnesses so it was hard to, plus the stories that have been surfacing needed clarification.

the story was not supposed to go out but unfortunately, there were many eyewitnesses

the event was ours but there was a point that came he claimed we were interfering with the event for him.

'How was your pregnant wife be involved?' Shaffie Weru asked.

she does any business as long as its brings in money. she had a staND there to support THE EVENT as a family. i think there was a point of disrespect

How did Mr Seed pack his bags and leave EMB Records?

After termination, Bahati texted and said the lawyer will get back to me. the lawyer sent an email and that was when I was free. after the post, so many stories came out.

After Mr Seed announced, Bahati commented blessing his new journey, but all that was PR.

Bahati commented for PR purposes. he claims he fired me because i was not making hits

So what next for Mr. Seed and Bahati?

we have fought before and at this point I just want people to know my side because i have been silent. the stories he has been airing needed clarification. he is my brother because emb is like family. i do not have issues with anyone