Me? Cheat? On you? Never! Diamond assures Tanasha of his fidelity 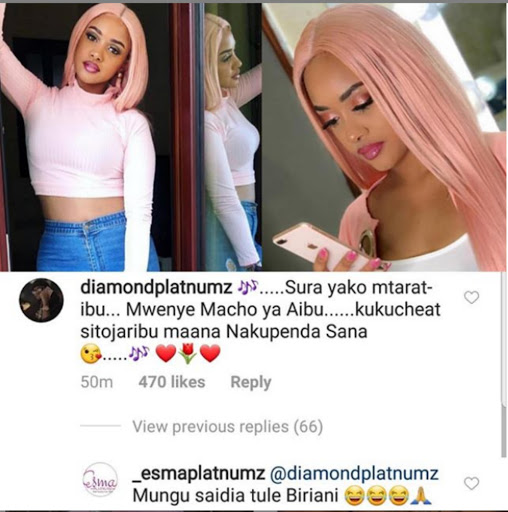 Tanasha Donna has to live with the reality that Diamond could backslide and cheat on her as he did to his ex and mother of his child, Zari Hassan.

Zari dumped him on Valentine's day last year after she had had enough of his philandering. At the time, a lady that had spent the night with Diamond came out to talk about the one night stand.

The weekend before that, Diamond had been filmed getting cosy with ex, Wema Sepetu. That broke the camel's back.

"Understand that this is very difficult for me to do. There have been multiple rumors some with evidence floating around in ALL SORTS of media in regards to Diamond’s constant cheating and sadly I have decided to end my relationship with Diamond, as my RESPECT, INTEGRITY, DIGNITY & WELL BEING cannot be compromised. We are separating as partners but not as parents."

In an interview with , Tanasha reveals that dating Diamond comes with its pitfalls. Some of them include skirt wearers.

“I do feel insecure [dating Diamond]," Tanasha told Kiss100.co.ke, "He told me the social media drama I’m facing is nothing compared to his past relationships. But once his fans realize he is indeed serious with our relationship, they will show their support, which I’m already seeing.”

Adding, “At the beginning of the relationship, I used to cry daily. I almost fell into depression.”

But it seems Diamond's eyes are fixed on Tanasha and no one else.

Diamond declared his love for her in an Instagram post which he later pulled down. But sisi ni nani? Here at Kiss100.co.ke, we took a screenshot the minute the post went live.

"Sura yako mtaratibu... Mwenye Macho ya aibu kukucheat sitojaribu maana nakupenda sana. (Beautiful and stunning looks with coy eyes. Cheat on you, I will never because I love you too much)."

Diamond's sister, Esma added her thoughts about the declaration of fidelity in the post.

"@diamondplatnumz Mungu saidia tule Biriani. (God help us, so that we can feast on biriani [at the wedding])"