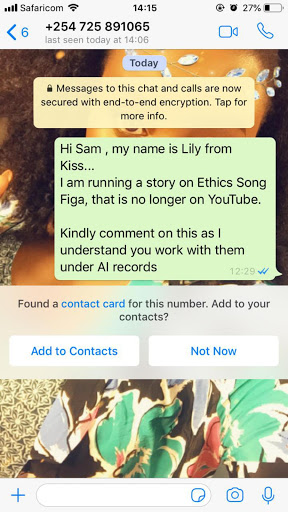 Today we woke up to shocking news that their recent release, Figa featuring Kamene Goro as their video vixen has been pulled down from YouTube.

The song was a different feel from the others. From their dress code to even the quality of the video after they got the opportunity to be signed by AI records that was bought by Universal Music Group in 2018.

The song had scooped over 2.5 million views and it was a club banger. It is not a party if Figa has not been played by the DJ.

KOT went all out on their research to produce a song,  Cono by Puri from Mexico, that has the exact same beat. The song has over 25 million views on YouTube and was released on the 9th of December 2017.

So your guess is as good as mine that this is a copyright issue.

We reached out to Sam a member of AI records who is in charge of Ethic but he did not respond after numerous phone calls and messages.

We will keep you up to date as the story unfolds.