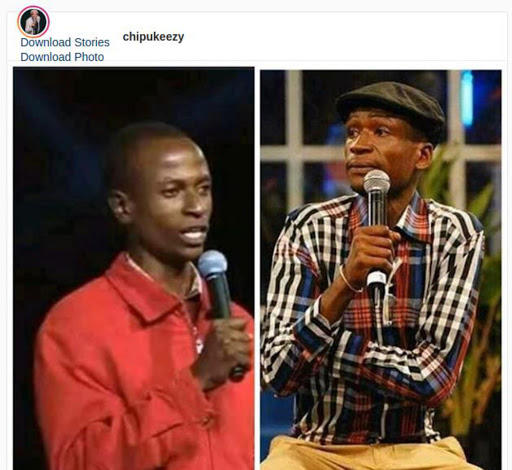 Chipukeezy rants against bloggers for killing his friends
Churchill Show Comedian James Daniel Njenga alias Njenga Mswahili was found dead afew days ago along the train tracks in the Dagoretti area. The cause of his death is still unknown but his death has spread shock and fear among Kenya's fledgeling comedic scene as both comedians associated to the Churchill Show (Laugh Industry) and those not affiliated to the company have been moved to speak about the situation in the comedic scene.

Chipukeezy has taken to his Instagram account to speak about the late Njenga's passing saying the following solipsistic statement:

ARBORTION comes in different forms!!! It is the act of terminating a life (Human) before it fully develops. The entertainment industry is busy making love, conceiving babies and KILLING them, we are all GUILTY of MURDER!! the Industry!! The Media (Mostly bloggers) and the Corporate world. The Industry never really supports you and never wants to see you grow and when you work your way and grow the bloggers are on wait to chew you, only NEGATIVITY sells for BLOGGERS, BLOGGERS YOU ARE GUILTY of MURDER!!! You have KILLED DREAMS!!! DEEMED lights and lives of young TALENTED people, You rarely SUPPORT, You never write the good stories the POSITIVES, when we WIN awards you go completely MUTE...But when you hear the slightest wind of an artist "struggling" you swiftly swing into action. The CORPORATES are a multibillion industry and Pay peanuts to Artists or, not all but most do not respect ART or see it's worth... GUILTY!!!All Njenga Mswahili wanted to do was to make you laugh, all AKA Ayeya wanted was to make you giggle abit. The untimely deaths of both AKA and MSWAHILI are identical in nature...They both suffered some sort of DEPRESSION before their demise. These depressions were caused by Frustrations that could have been avoided since they are caused by the SYSTEM, the MEDIA, the INDUSTRY and the CORPORATES, in short KENYANS. We have to embrace, Support and OWN our OWN. I am GUILTY, you are GUILTY.Thou Shall not Kill! RIP

Chipukeezy's colleagues MC Jesse, Otoyo, Mwende the Comedian, Terrence Kamami and this is what they had to say:

As the Churchill family, hii kifo ya Njenga Mswahili imetutouch sana despite the fact that alikuwa amechukuwa break kidogo. Depression took our friend down in as much as no one knows what happened ndio ajikute kwa railway line.