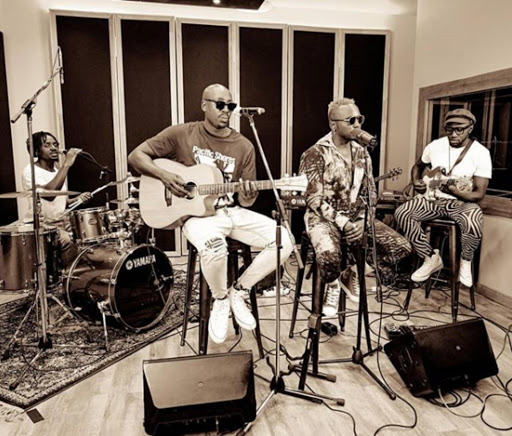 Kenyans have now been forced to stay home and quarantine after the number of Kenyans who've tested positive for Corononavirus climbed to 15, according to Health CS Kagwe.

Sauti Sol has had to cancel a lot of their concerts because of the lockdown in various parts of the world but that doesn't mean they will not entertain their fans.

They promised to give fans an online live concert where everyone was a VIP at 8 pm Kenyan time.

"Social distancing doesn't have to be boring. Join us tomorrow at 20:00 (EAT) | 17:00 (GMT) | 10:00 (PDT) for a little concert on IG Live from home. We wanna spread as much positive vibes out there as possible. In the meantime, you can learn about actions you can take to help slow down the spread of coronavirus with @glblctzn & @who #TogetherAtHome" Sauti Sol posted

They started off with a few thousands views but the number grew so fast to 7000 plus by the time the live session was over.

Sauti Sol did a whole hour of their greatest hits from way back and ended with Kenyans favorite new anthem, Suzanna.

Kiss 100 was there to watch it live and we noticed the majority of the loyal fans under the comment section were Kenyans. The comments were hilarious with people getting creative imagining they were in a normal love concert outside.

You could see people having conversations on the comment section which grew the traction of the live video. Guys were sending in requests and giving the band a lot of love.

Other than the love for Sauti Sol and their amazing voices, one thing that was talked about for the most part of the recording was Savara's short shorts. People called them booty shorts, boxers underwears because they were just too short.

He defended himself saying that is the only way he will prove he is at home self quarantined because that's his normal dress code when chilling at home.

John Legend and Miguel are a few other artistes who did an hour-long Instagram live concert for their fans just to spread positive vibes.

In case you missed it, here are a few screenshots we managed to take. Focus on the comment section for a laugh.