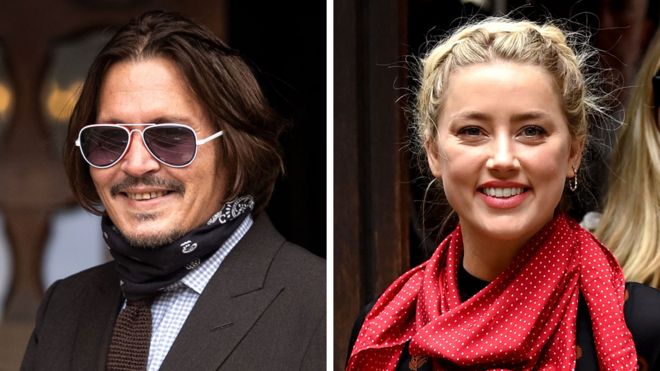 Heard, 34, is giving evidence on behalf of the Sun newspaper whose publisher, News Group Newspapers, is being sued by her former husband Depp for libel over a 2018 article which labelled him a “wife beater”.

She says the 57-year-old “Pirates of the Caribbean” star attacked her on at least 14 occasions, threatened many times to kill her, and that he slapped, punched, head-butted, throttled and kicked her when he became “the monster” - a violent and jealous alter ego fuelled by excessive drinking or drug-taking.

Depp denies hitting Heard and says the claims are a hoax and he was the victim of her assaults.

On her second day in the witness box, Heard was questioned about an incident in March 2015 when she hit Depp during an argument at their Los Angeles penthouse. She said it was the first time she stood up to him and she believed Depp was about to push her sister Whitney down the stairs.

“And the moment that happened I remembered information I had heard (that) he pushed a former girlfriend – I believe it was Kate Moss – down the stairs,” Heard told the court.

The memory had come to her in “a flash” and she reacted to defend her sister, she said.

Depp’s lawyer Eleanor Laws said this was the first time Heard had mentioned any recollection of the alleged stairs incident and it had not appeared in any of her previous statements.

“I have never changed my story,” said Heard, but agreed she had not said it before.

Regarding another alleged incident in Australia, Laws put it to Heard that Depp could not have grabbed her hair with one hand and punched her with the other because one hand was in a cast.

Heard said Depp had struck her with the cast, prompting Laws to query why she had never stated this allegation before.

“You are just making this up as you go along,” the lawyer said. Heard replied: “I didn’t include every detail or every thought.”

Heard has said she was repeatedly assaulted by Depp during their stay in Australia.

She described how at one stage, he had forced her, naked, against a kitchen counter covered in glass and pressed on her neck, choking her. Holding back tears, she told the court she tried to push him off, saying “Johnny stop, it’s me, stop please”.

As she gasped for breath and writhed around, she said she cut her feet and arms on the glass. However, Laws said a picture of her wounds caused in the incident looked like self-harm scars.

“Those scars on my arm were from that evening, I have never self-harmed,” Heard said.

Asked why she had agreed to return with Depp to the same house in Australia a couple of months later, she said: “Johnny - the monster - nearly killed me. I loved the Johnny who was clean and sober.”