'I heard he didn't make it,' Wahu narrates the day she got the call on E-sir's death

Over the weekend, close friends and family of the late E-sir celebrated his life. He passed away 18 years ago on Match 16.

We still jam to his songs especially the 90's babies who grew up listening to him as one of the few and biggest artistes then.

Nameless who was a brother to the late together with his family went to visit the gravesite and that brought a lot of memories to Wahu. Back then she was Nameless's girlfriend.

Taking to social media, she narrated the story from Nairobi.

"That fateful day. (Through my eyes)

March 15th 2003. Monski (Nameless) and Esir were getting ready to go for a gig in Nakuru. It was a sato morning. The boys were very excited. Shaddie had offered to drive and his friends Kevin and Santos who was loose that weekend was excited to go. I remember saying goodbye to the guys at the msa rd oil libya just as you turn into south C. That was the usual drop off/pick up spot. It looked like they were going to have a lot of fun so i was feeling FOMO ct. We said our goodbyes and the boys were off to Nax. As the story goes...they killed it that night...big time. Monski was usually the one who performed last, but that particular night, he asked Esir to do so. I hear it was faya! Too much fun! And Esir, whose joy was always to watch others enjoying his music, had the time of his life..."

Adding that she got the call on the accident from a female politician. 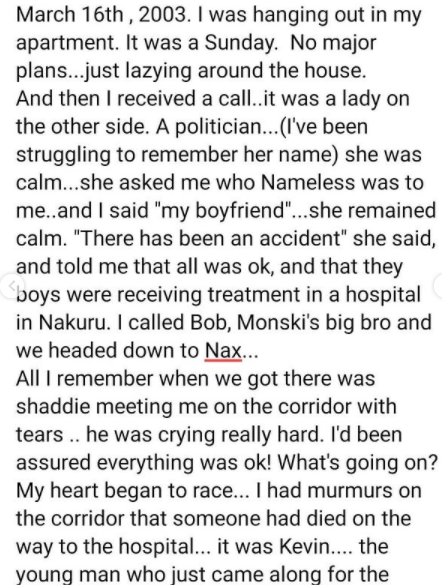 Letter by Wahu on the death of E-sir through her eyes
Image: Instagram

Seeing her boyfriend, Nameless (Monski) in so much pain after the accident was not easy for her and then receiving the news that E-sir and Kevin -who just went for a good time-  passed on was worse.

"...ride. How unfair could life be! I was so confused... I wasn't ready for all this! From the corner of my eye I saw Monski...I ran to him but couldn't hug him coz he was in so much pain! He'd dislocated his collar bone. "I can't find Esir" he told me and Bob. Which hospital did they take him to! But unfortunately...along the corridors, I heard that Esir didn't make it. I didn't want to believe it.. I wanted to keep hope alive. All our hope was crushed and Bob was asked to identify the body in the morgue.... we cried...we cried... We cried... We cried....it was painful...how??? Why??? He was so young! When I think back to that moment...and watching my boyfriend fall apart as he mourned his friend, I remember as I cried for the loss of Esir, I cried for my boyfriend... They were very close. I cried for the loss of such a promising young man, who had so much to offer the world... I cried for mama" Wahu continued 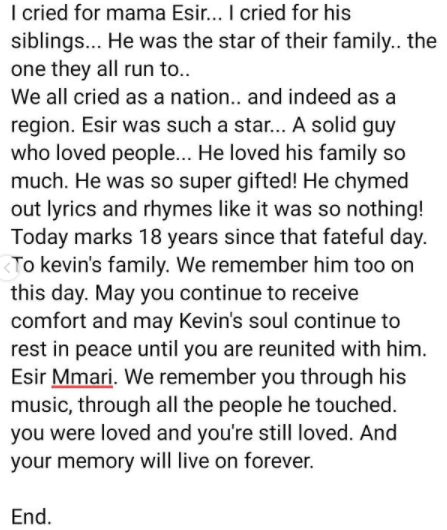 Wahu's letter on the death of E-sir through her eyes
Image: Instagram

As a country we still celebrate the good work of E-sir and the likes of Krupt who gave us amazing music and paved way for Kenyan music.

'You inspired so many of us' Celebrities mourn the death of Christian...