This is the babe who was in the picture that was shared on his birthday as he turned 36 a few days ago.

In an interview with Katanu Munyao, Tony clarified that he is not in a relationship with Yvonne. The photos that raised eyebrows from a recent Birthday party, were just the 'heat of the moment' nothing more.

“Hata mimi niliona kwa mitandao ati 36-year-old Tony Kwalanda dating a 24-year-old! It was a blunder and ladies get very excited when they celebrity I think, especially those who have never met celebrities. So we took pictures and ghafla bin vuu I see them on social media. But in reality am not dating and I don’t have any other girlfriend as we speak right now as opposed to what people are saying, that I can tell you without fear of contradiction. I’m not dating that lady called Yvonne ule alionekana kwa mitandao." Tony Kwalanda explained

You remember a few days ago Tony posted TBT pictures of him and Joyce saying he still has love for her. In the interview, he gave us a sneak peak of what their relationship was like saying it was healthy.

“It was a very healthy relationship coz we were very open with each other and talk things the way they are. I learned a lot of stuff from her, she made me grow in so many things which I really appreciate. I did also my part to her side, and I will always wish her the best. Joyce never wanted to change me, she wanted me to be myself as much as we were having a relationship... but people were like haka kajina kanashukisha Joyce, ooh sijui nini but ot never bothered me and by the way before I met Joyce I had like 3K followrs said as we speak I have over 30K followers” He said

He then made it clear that they are still friends despite the break up. I mean they have to see each other at work everyday and they don't want it to be awkward. 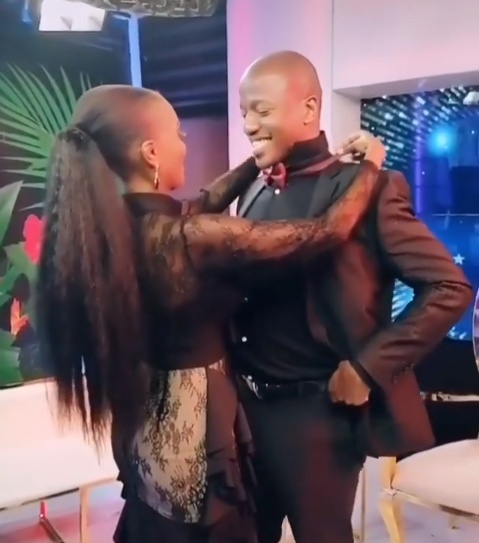 Joyce Maina and Tony Kwalanda before break up
Image: Instagram

“We were an item, na mimi nikipenda mimi hupenda. I am a very faithful person I stick to them. However, as we came to learn each other, certain things came up... we had our own differences and we sat down and we talked about it and mutual kama civilized human beings we talked and sort things out in a good way”.

We are good friends we talk because we shared a very good part of our love life, she knows a lot about me and I know a lot of her so tunaachana but we are goods friends, we talk, we work together in the same station. " Tony revealed

So please, wacha rumors, he is not dating Yvonne, the heat of the moment took over.

'I don't know why Tony still has our pictures online' Joyce Maina...