Taylor Swift's re-recorded version of her Fearless album won't be in line for Grammys next year after she decided not to submit it for awards consideration.

The original version was named album of the year in 2010 but won't be able to repeat that feat at the 2022 event.

Evermore, the US singer's follow-up to this year's best album winner Folklore, will be in contention however.

Swift plans to re-record and re-release her first six albums in order to have complete control over her music.

It follows the 2019 acquisition of her master recordings by music mogul Scooter Braun and his subsequent selling of them to an investment fund.

Swift is opposed to Braun or any other party profiting from her recordings and has used her publishing rights to block some attempts to exploit them.

The 31-year-old hopes fans will listen to and buy the new versions of her albums on streaming services and download stores, rather than the originals.

A "Taylor's Version" of her 2012 album Red will be released in November.

Released in 2008, Fearless went on to be named both album of the year and best country album at the Grammys.

Swift won two additional awards at the 2010 ceremony - one of which she dropped while posing for photos afterwards. 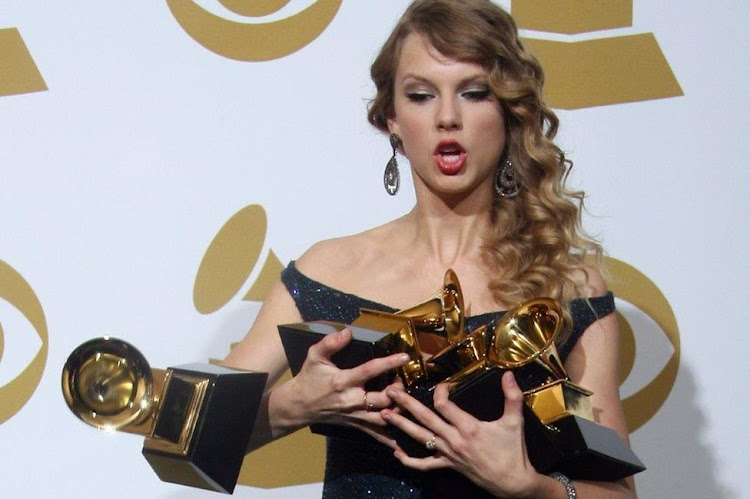 Swift won album of the year again in 2016 with her 1989 record before winning the prize once more this year with Folklore.

She is the first female artist to win album of the year three times, a feat three men - Frank Sinatra, Paul Simon and Stevie Wonder - have achieved.

Republic Records, her current record label, said Fearless was already "the most awarded country album of all time" and that she had decided not to submit it "after careful consideration".

It is up to individual artists and their record labels to submit their records for Grammy consideration, a process that can sometimes lead to some surprising omissions.

Cardi B, for example, chose not to submit her single WAP to the Recording Academy, despite it being one of the top-selling singles of 2020.

"I didn't want to be submitted to award shows until I put out my album," the US rapper explained on Instagram last November.

Cardi B went on to perform the raunchy track with Megan Thee Stallion at the 2021 Grammys ceremony, held in Los Angeles in March.

Frank Ocean also chose not to submit his 2016 album Blonde, alleging the Recording Academy was prejudiced against black artists.

"That institution certainly has nostalgic importance," he told the New York Times. "It just doesn't seem to be representing very well for people who come from where I come from."

Earlier this year The Weeknd said he would boycott future Grammy Awards after being left out of this year's nominations.

"I will no longer allow my label to submit my music to the Grammys," he announced, expressing disbelief at being asked to perform at the ceremony despite not being shortlisted.

His stance was supported by fellow Canadian Drake, who had previously declined to submit his 2017 album More Life for Grammys consideration.

"I think we should stop allowing ourselves to be shocked every year by the disconnect between impactful music and these awards," he wrote on Instagram.

The 2022 Grammy Awards will be held in Los Angeles on 31 January.