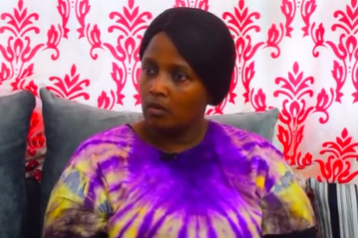 Mrs. Ngatia, real name Judy Wacuka who is Omosh's first wife has been trending after she asked fans to also build her a house.

According to the Tahidi High actress, she revealed that Omosh neglected his first family after marrying his second wife.

In an interview with Hiram Maina alias Kamuhunjia, Judy said they had been together for 18 years, but he left after marrying a second wife 10 years ago.

“He had time for me and my children but since the second wife came, he is always busy. I accepted her as my co-wife but he forgot about us when they moved in together. We have been very distant,” she said.

She added that Omosh has never formally told her or her parents that they separated.

“He has never informed me or my parents that we separated, he should release me. My children miss their father. He does not know what we go through,” she said.

Judy said that whenever she needs to speak to him about their kids, she must go to the second wife’s house.

“The second wife is the one who benefited when Kenyans raised funds for Omosh,” she said. “You don’t announce such things in public,” she added.

Judy said she was thrown out over rent arrears numerous times as the landlords could not believe she could not pay rent.

“If I could get just a one-bedroom metal house, I would be glad. I know Kenyans are going through a lot and some of them have more problems than me.”

Judy and Omosh met at work as they acted in the famous Kenyan series, Tahidi High.

“He hates me for nothing. I really love him but he does not love me. I miss him so much. In the 18 years we were together, he was loving and caring,” she said.