Nameless: Portion of the earnings will go to E-sir's family 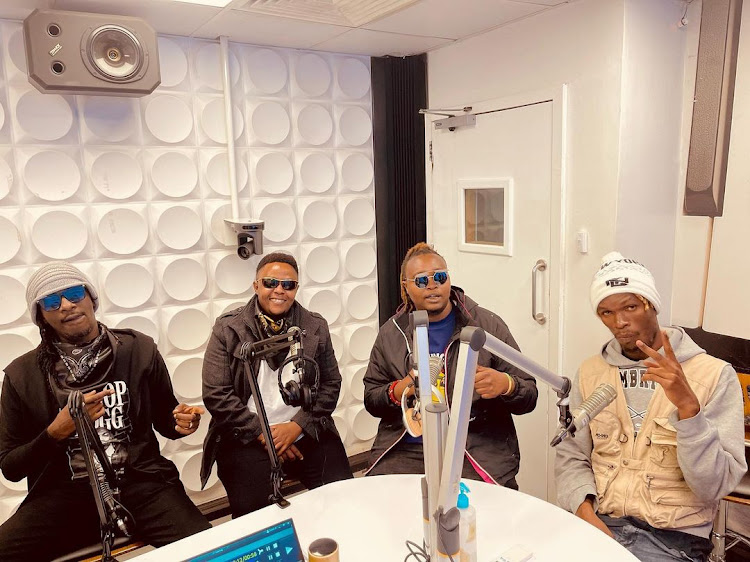 Nameless, Habib, Nelly the goon and Dmore in kiss studio - Bandana ya E-sir

On Wednesday, Ochungulo family in collaboration with Habib, Nameless and Trio Mio dropped the much anticipated 'Bandana ya E-sir' project.

The song is already received rave reviews and is the third trending song on YouTube less than 24-hours since it was released.

Legendary musician, David Mathenge alias Nameless has revealed that a portion of the proceeds from 'Bandana ya E-sir' song and merchandise will go towards the late E-sir's family.

Speaking to Kamene and Jalas on Thursday morning, Nameless said that the reasoning behind that was to ensure his family benefit from the art he created.

"A portion of the earnings will go to the family and we are doing merchandises from bandanas and hoodies which will be coming soon." Said Nameless.

Just remember E-Sir passed away at the age of 21 and he had already done an album, what pains me is that he can't earn from the music he did and as artists we make money from concerts.

So what we did is we put all his music on all digital platforms so that guys can now access his art.

I always say it would have been me that passed away in that accident and I say when I pass I want people to remember me through my music.

He further revealed that King Kaka was the one who designed the E-Sir logo and did it out of respect for someone who inspired his craft.

I called on Kaka who is a designer by the way and he designed E-Sir's logo and he said it was an honor because he always looked up to him.

The beautiful merchandise will be online but they will also be available in shops as they work to make sure his brand is alive out there.

Congratulations! Milly Wajesus and Kabi with an expensive pregnancy reveal