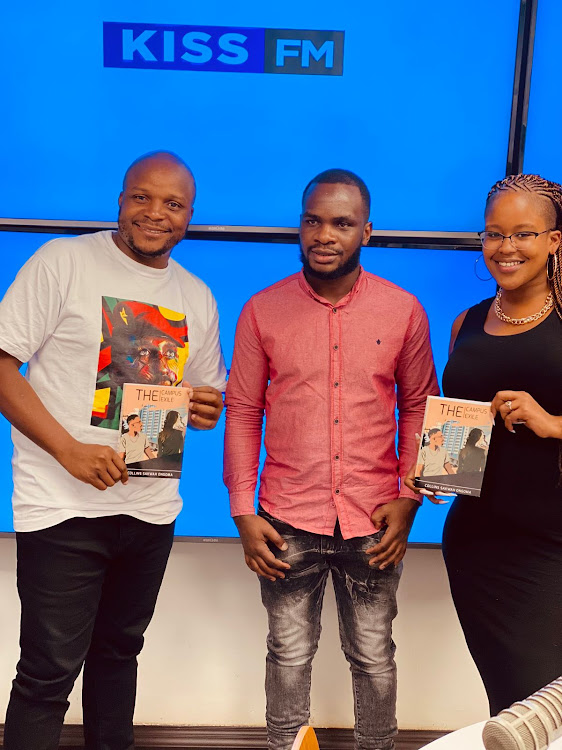 Author Collins sakwah in studio with Kamene and Jalas

Sometime back author and content creator Collins Sakwah was furious with Kamene and Jalang'o for using his content on air.

Collins whose Twitter handle is @CSakwah took to the social media platform to air his disappointments saying The Morning Kiss presenters  had used his work before without crediting him.

To settle it all, Jalang'o reached out to him following an outcry from KOT and offered to host him and help him promote his works to which Collins agreed.

This morning, the 28-year-old said revealed a lawyer had offered to help him sue Kamene and Jalas but he thought it would be wise if they settled their differences in a more amicable manner.

"I was offered a chance by a lawyer to pursue this but I don't think it was necessary and we could do it in a more amicable way." Collins said.

I haven't patented my work but social media platforms gives me rights to my content so even photos you are going to be held responsible for what you post on social media.

The presenters clarified that they had apologized on air following Collins' rants but unfortunately the author didn't get the apology, but has since forgiven them.

I thought that was the best platform to air my grievances because I thought it was infringed. I have forgiven you totally I don't think there's a problem.

Collins who focuses on crime fictions and romance says he self published his book 'The campus exile' adding that it took him three months to complete the book.

He called on Kenyans to support him and other authors who are also regarded as content creators.

Jalang'o: Why do you normalize cheating in relationships?