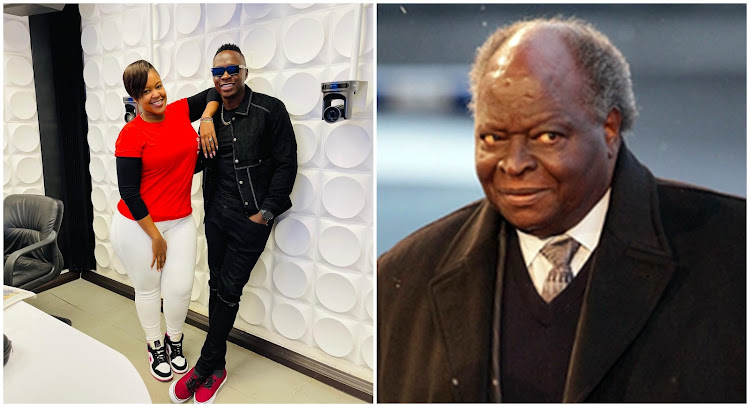 From an uproar from Kenyans on where the late former president of the republic, Mwai Kibaki, should be buried, Kamene and Obinna had a share of their own opinion towards the burial plot.

From an insight of the conversation on today’s breakfast show, Kamene said that as much as he was our president, he still has a family and he should be buried at his home village in Othaya, Nyeri County whereas Obinna, together with the public, insisted on having the gravesite at Heroes Conner in Uhuru Gardens.

The two continued praising the former head of state, adding that both Kibaki and the late Mama Lucy had no chills.

Obinna started by saying, “Birds of the same feather, flock together, Kibaki was a strict person and I saw a Maghufuli in him.”

With Kamene backed up, adding, “Also half of the tricks that are happening right now could not have been happening back then, I think he had a well-oiled machine.”

Check out the conversation below:

Meanwhile, the former president's body is lying in state at the parliament building where it will eligible for public viewing from today till Wednesday, this week at 9 AM till 5 PM.

After lying in state for three days, on Friday, April 29, the military gun carriage and State Funeral Procession will make their way from State House to the Nyayo Stadium, the venue of the National State Funeral.

Kenyatta was scheduled to officially open the 2022 Zimbabwe International Trade Fair (ZITF) to be held from April 26 to 30 but Zimbabwe's permanent secretary in the Ministry of Information, Publicity and Broadcasting Services, Nick Mangwana, through his Twitter handle, publicized the cancellation.