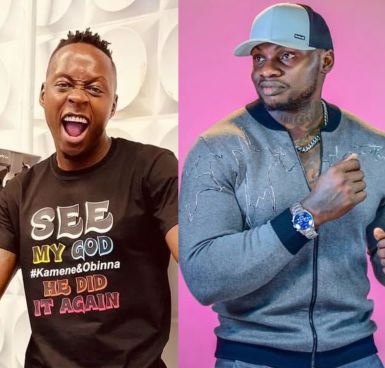 Following Khaligraph’s decision to postpone the release of his new jam Maombi Ya Mama in honor of the late president Mwai Kibaki, Kamene and Obinna are advocating that entertainment functions that were to happen this weekend should be postponed too.

From today’s Morning Kiss, Kamene started off by saying, “The death of the former president Mwai Kibaki will also affect our entertainment industry.”

Obinna intercepted him by saying;

“OG had to respect another OG, his new album is out and he was to release a new jam for the album tomorrow, but because of how things are now, he will hold on till the funeral is over.”

In line with Khaligraph’s decision, other artists, especially Mugithii artists, have also postponed their gigs to pay respect to the former president.

“We should postpone all our riengs this weekend and pay respect to our former president and lets all grieve as a country," Kamene said after Obinna mentioned that there were other celebrities who refused to cancel their events.

Kamene argued that despite the former president’s death, citizens are also struggling financially and have no money to attend events and parties as usual.

Obinna contradicted Kamene’s argument stating that such a moment should be a celebration of the life Mwai Kibaki had and his devotion to serving the country.

“It is a celebration of a life well-lived kama huna pesa chukua loan…the sherehe has to be sherehe, for grieving, we are grieving about the money we have lost now that children are going back to school, kama ni kukaa home, sawa. Tutakaa home hapo kwa kalocal,” Countered Obinna.

While announcing the postponement of the Maombi ya Mama release, Khaligraph said the video will drop on May the 5th.

"Maombi Ya Mama, was supposed to drop this week but we had to postpone it to next week after losing a National Hero (R.I.P Kibaki) on Wednesday. We go Live on YouTube, Meanwhile, Keep on Streaming invisible Currency, #respecttheogs," he wrote.

Khaligraph's song, Maombi ya Mama, is a dedication to his parents.

Video of the day: Obinna offers to pay for Khaligraph's 'sifu bwana' remix

Obinna thinks both Khaligraph and Nyashinski who was featured on the song never gave it their all and would dig into his pockets for a remix of the ...
Entertainment
3 months ago

Khaligraph Jones has opened up about his struggles with suicide.
Entertainment
3 months ago