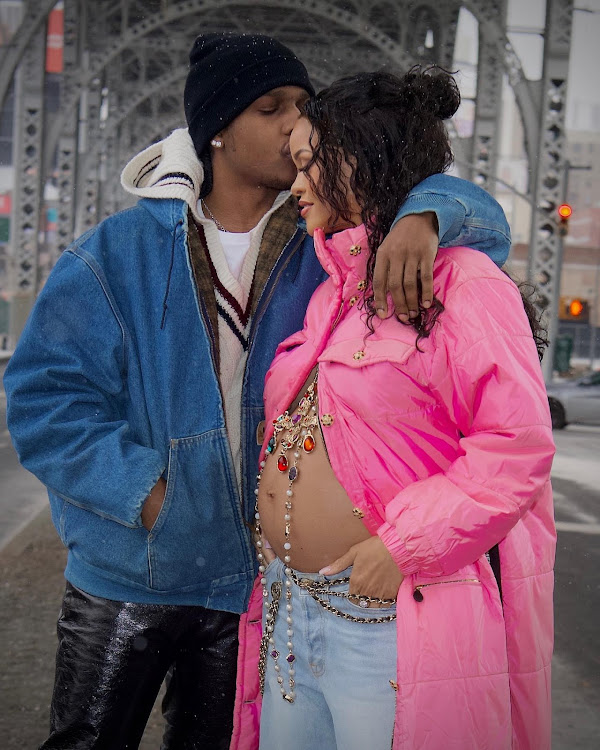 Excuse me but I am beyond excited!

Lol, I'm so excited you'd think I'm part of the family or a close friend.

The two were first reportedly rumoured to have started dating around the last week of January, that was roughly like 7 years since fans first speculated the two to have been dating.

This was shortly after Riri had broken up with her then ex boyfriend Hassan Jameel whom she'd been in a relationship with for close to three years.

The cutest thing is that Asap has always been infatuated by Riri and he hasn't been shy about admitting it on interviews.

Asap and Rihanna are also expecting their first child together.

Well Asap Rocky has us all in our feels after he proposed to the love of his life in the cutest most unique way possible.

In his new music video (that has in less than 24 hours gathered over 2.4 million views and 273 thousand likes) the 33 year old proposed to his pregnant girlfriend by wearing golden rills on one side of his teeth that read "Marry me"

He also featured Riri in the music video that's dubbed 'D.M.B.' which is short for Dat's My B*tch.

Rihanna is seen in a long red dress and a veil, she then slowly lifts up her veil and smiles as Rocky's scene comes up. He smiles and his grills are clearly visible then the camera pans to Rihanna who smiles and guys she is also wearing a set of grills!

The two smile like high school lovers as they embrace each other.

Then a time capsule of their relationship as well as other visuals of the song start playing before the two kiss then they're seen walking out with Riri holding a bouquet of red roses while people around them throw flower petals to them while celebrating the two.

Rihanna: 'Why should you hide your pregnancy?'

she opens up about her unique approach to maternity wear.
Entertainment
9 months ago