A mubaba is someone over 45 and loaded with money 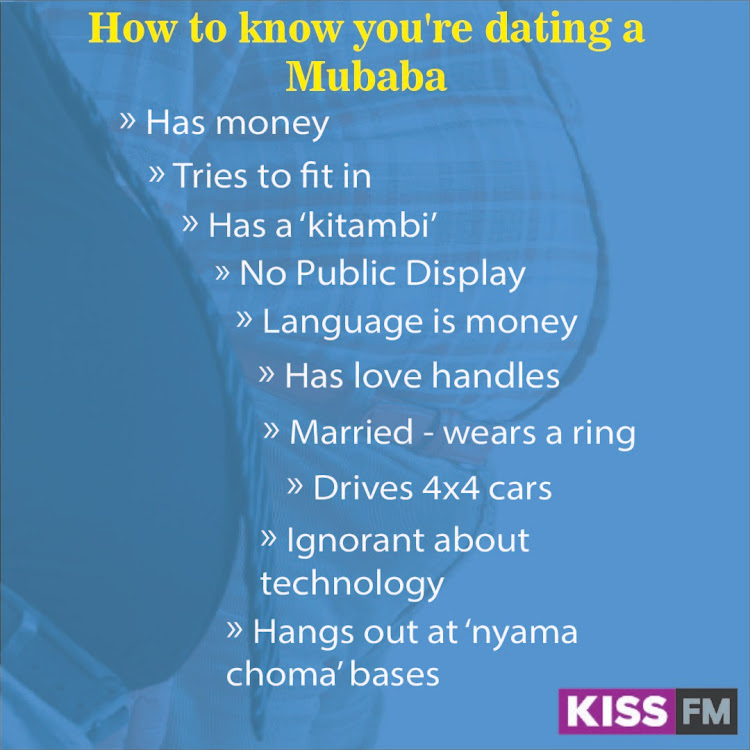 A list on the qualities that a mbaba entails

Remember when gengetone first hit the airwaves and everyone wanted to blend by knowing the lyrics and moves that went with it, even though it was evidently clear that that wasn't their forte?

Well, you are all doing it again but this time it is not with something like a dance move that can be learnt with practice.

Though if we are being honest for some of us, even though we attended a fully-funded 1-year course we would not be able to 'Odi' dance even to save our lives. And in case you are wondering, yes I am part of 'us'.

The term mubaba came to the scene and now we are all crazy about it.

Wait, I have just realized some of you might need clarifying.

A mubaba is an old man ideally over the age of 45 to whatever. (I am saying whatever because I have seen babes with 70-year-olds' so there is really no cut age as long as the monetary benefits flow)

And not just any old man, it is an old man whose pockets have something to show for all the decades he has been on this planet.

Someone with vast wealth, investments, and estates. Lastly, he must be well educated in the spoiling a baby girl arena.

Ain't no way you are dealing with grey hairs and a kitambi and still begging for mere 50 thousand for the weekend, house rent in the posh suburbs, or a new phone. It is unacceptable.

In simpler terms, a sponsor or sponyo as you all used to call them.

Lol, that was so ghetto if you ask me. It even sounds so funny saying it out loud, sponyo. I'm not saying mubaba sounds better but it has a nicer ring but hey that is just my opinion.

Now that we have got the definition out of the way, let us dive into the qualifications to 'own' the name.

A mubaba has to have a big car, something that looks like his age, build and stature. I am talking Discovery, Prado Tx, Mercedes AMG, Hyundai Palisade, and the likes you know.

With that being said, let us get it straight, the 32-year-old you know driving a Note or Toyota Vitz is not a mubaba.

If he can not book a villa for you and your girls, pay for the flight, and drinks he is not a mubaba.

If he can not get you a new iPhone months after it comes out he is not a mubaba.

Stop calling your small struggling boyfriends wababa just because they bought two bottles of Black Label in the club.

Also on the fact that they are married and have families, you mostly see them during the weekends when they take road trips and you can not call the casually whenever you want. They do the calling you just answer and show up looking pretty.

TIPS! How to know you are dating a mubaba

We came up with a list of tips to know that you are dating a mubaba and how to spot or identify one.
Entertainment
3 months ago