Nameless taunts fan who thinks he can't survive without Wahu 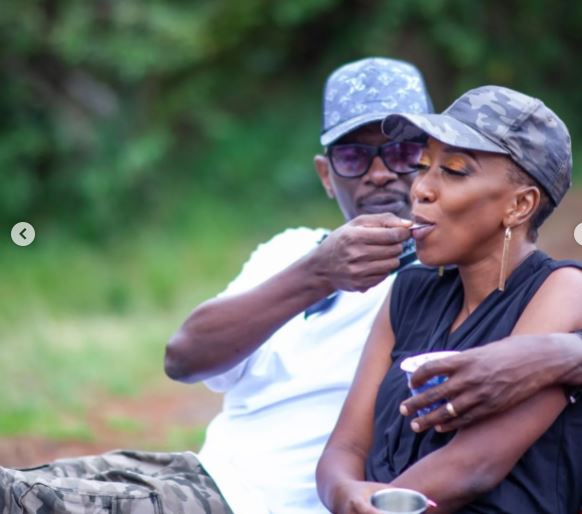 Legendary musician, Nameless taunted a fan who thinks that he wouldn't be able to survive with his wife Wahu Kagwi.

Days ago, Wahu posted a throwback photo of the couple together from their campus days.

She wrote, “Me and my campus boyfriend. only Jesus Christ and my big sister knew how much I loved this boy!”

Many of the couple's fans reacted to the photo as they made fun of their fashion sense from back in the day, until one troll decided to ruin a good moment.

According to the fan, Nameless would be finished without Wahu in his life and hence why he the two are still together.

Here is what the fan wrote;

“Imagine no man can leave a woman if he knows she can do better without them. Its all starts with us not setting boundaries and worshiping them. Mathenge knows without Wahu, he is finished and she will do just fine without him.”

Nameless was not going to let the troll go unchecked and he decided to school him on how the two chose to live their marriage life. Nameless said together or apart the two would still be fine.

“I choose to reply to you because I feel it is very unhealthy to promote such thoughts that people can be nothing without each other,” he wrote.

Adding, “That is something we decided early in our marriage. We decided that we have a choice and together or apart we would be fine … nobody will die. But we choose to be together because we have identified the value of our partnership in our individual journey."

The 'Maisha' hit maker said such mentality can be attributed to increased cases of spouses killing each other and called on couples to embrace the reality of still being OK apart.

“That’s why many people are killing themselves or are killing their spouses, because of such thinking. We should promote, We are ok apart but can be better together,” he wrote.

Wahu and Nameless recently celebrated their 16th wedding anniversary and are blessed with two daughters.

It was a three-day event
Trending
1 month ago

LIST: Things Nameless is willing to do for Wahu on her birthday

The 'Teamo' singer took to his socials to wish the love of his life a happy birthday and to top it off, offered to; buy her anything she desires, be ...
Entertainment
3 months ago