Dwayne's first born daughter, Simone confirmed that she was living her childhood dream in her new career path 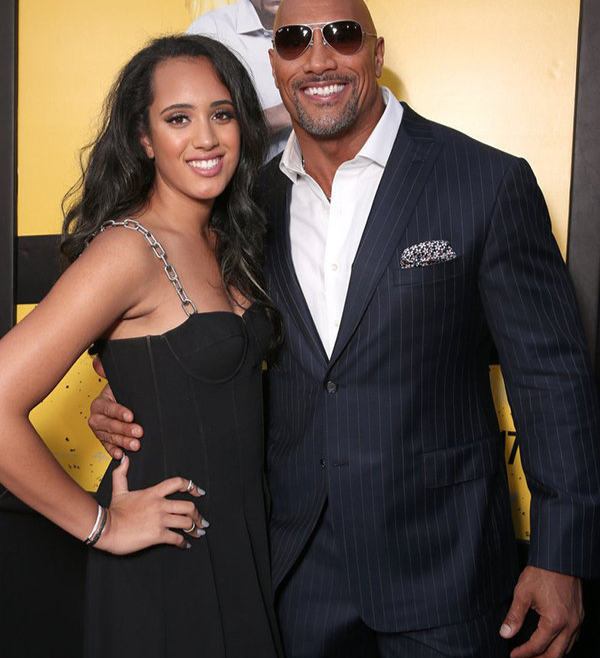 WWE wrestler turned pro actor whom we love to see on our screen Dwayne Johnson popularly known as The Rock (the name stuck from when he was a wrestler) is a proud dad.

This comes after his first daughter with ex-wife Dania Garcia, 20-year-old Simone Johnson was cleared to officially fight and compete as a wrestler in WWE

Simone has been prepping for her debut since she was 18 years old with the aim of following in her famous dad’s footsteps, and at just 20 years old she is actualizing her dream.

Bruh I mean, those are some big shoes to fill but as the wise men said, the apple doesn't fall far from the tree so I'm all in rooting for Simone.

Simone took to her socials to announce she was officially changing her name and would from now on be going by her wrestling name, Ava Raine.

She shared her moniker on Instagram and changed her handle to Ava Raine WWE. She went ahead to officially change her Twitter handle to her new name as well.

Her exciting news has been a long time coming considering she originally signed her deal with the WWE in early 2020.

But her debut was delayed due to injuries she had that ended up needing surgery, but now she’s all ready to go.

Simone (making the announcement that she had been signed) revealed she dreamed of getting into wrestling ever since she was young, confirming that she actually fell in love with wrestling as a toddler.

She posted a photo of herself wearing a grey WWE T-shirt, writing on Instagram: ‘To the little girl who fell in love with wrestling & said “this will be my life one day”, this is for you. I’m humbled, grateful & ready to work. Let’s do this. @wwe @wwenxt.’

Simone’s grandfather ‘Soulman’ Rocky Johnson and great-grandfather ‘High Chief’ Peter Maivia were also pro-wrestlers, she might not be a dude but it’s most definitely in her blood.

In lieu of her lineage, Simone has faced criticism and comparisons to her relatives since announcing her dream to wrestle.

But the budding young adult has spoken out previously, making it clear she wants to make her own way in the industry.

"I probably sound like a broken record & hopefully this is the last I’ll mention this but I don’t understand why people being portrayed as separate individuals from their family name is such a heated topic. A name doesn’t discredit any prior accomplishments from any family," she tweeted.

She also added: ‘I could build my entire career around my father and people would still bash me anyway.’

The Rock has two other pebbles ( okay terrible joke... I know you laughed though)  six-year-old Jasmine and four-year-old Tiana with his wife Lauren Hashian.

Dwayne Johnson not returning to Fast And Furious

The Undertaker has reigned the WWE rings since 1990 to the 22nd  of November 2020.
Entertainment
3 months ago
WATCH: For the latest videos on entertainment stories