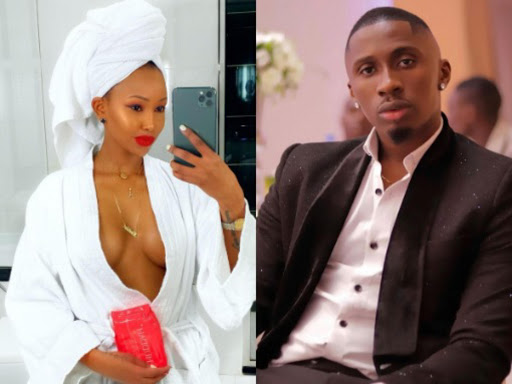 Over the past few weeks, Huddah the Boss chic caught the attention of many for starring as a video vixen for Tanzanian singer, Juma Jux.

The video, Simuachi, was released about two weeks ago which showcased Huddah the Boss Chick aggressively touching Juma Jux.

Photos have been circulating all over social media of the two kissing.

However, yesterday Juma Jux posted a two-sided photo collage with a friendly picture of the two holding hands on one side and the ‘Photoshop’ kissing photo, on the other.

The post was accompanied by a caption from Juma Jux that read, “#Friendzone 2020 Vs 2022 #Simuachi.” But what amazed me a lot was Huddah’s comment on the post where she wrote, “NAKUJA THIS SATURDAY UNITOE NYEGE” which translates to, I am coming this Saturday we get cosy together.

This drama dates back to May the 16th when Huddah had shared a pic of them kissing (the one netizens are saying it's Photoshopped). This had people reacting.

Juma Jux, still on May 16th,  told the media in a press conference that he wasn't dating Huddah.

He said that they were very good friends who hang out a lot.

But he was challenged about their association when a very suggestive video of the two emerged online. He laughed and shook his head in denial.

Adding, "If I was spotted with her or met her It could be normal just as friends do meet and hang out."

But as we know with Huddah, she loves fueling rumours and will not stop as the team promotes this song.