Flaqo Razo insisted that they their friendship was purely platonic 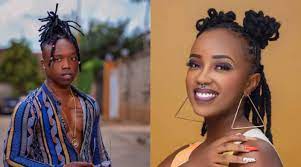 Content creator Flaqo Raz on the left together with Keranta on the right
Image: Courtesy

Speaking in a recent interview Flaqo said that he was single and currently not seeing anyone. But then the story of Keranta came up and Flaqo kinda short of words revealed that they are just friends.

"So that is why I'm normally around Keranta so much... also the agent who directs my shoots and Keranta's creative is the same person. Yeah... so... that's it. Plus I edit some of her videos," Flaqo added in a bid to truly clear the air and reassure their fans all over that there was nothing going on between the two of them.

On whether he had ever tried shooting his short or tried getting out of the friendzone corner, Flaqo laughed adding that him and Keranta were cool like brothers and their relationship was purely platonic.

'Aahh Keranta ni boyz...  Keranta ni boyz. By the way mnaulizanga hii swali sana (you guys like asking this question a lot.)" Flaqo said clearly short of words and intent on not saying the wrong thing or probably revealing too much. .

He however said that the future is always full of surprises so he can not totally rule out the possibility of something happening. But as of the now... the present, him and Keranta were just cool friends and work buddies.

Kenyans had a few things to say about the issue, below are a few comments.

kadama_mawi: The stutter gave an answer

Speaking in an interview over the weekend, Flaqo said that, at the peak of his career, he landed so many endorsement deals that it was turned into ...
Entertainment
1 month ago

In the music videos category, Tanzania’s songstress Zuchu’s ‘Sukari’ hit song was the most watched followed by ‘Baikoko’ by Mbosso featuring Diamond ...
Entertainment
6 months ago
WATCH: For the latest videos on entertainment stories