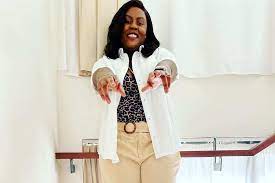 The 32-year-old while in an interview with members of the Iko Nini podcast she boldly challenged Kenya's recording and performing artist Femi One to a rap-off.

Yep, you read that correctly.

Speaking about Kenyan music and artists in the industry Winnie showcased that she is team play KE all through.

"There is another rapper Kamba mboys call Mbisi...." Winnie added

"Yeah... Mbisi is good pia... Mbithi is good. You have heard that new song?" The host agreed with her sentiments as he went on to ask Winnie who excitedly replied by saying yes adding that they were actually friends with the artist.

" Yes I have, I got all these songs. Mbithi is my boys, sana" Winnie replied happily with herself for being in tune with Kenyan music and her friend's achievements.

" Lakini in that new song... Hepi, I think the girl killed them..; Femi, Femi One...that first verse was cold. They all had dope verses but Femi after her verse..." Mwafreeka said.

" Aaahh I challenge her to a rap off, I'll do a cycle with her," Winnie said confidently.

The host clearly shocked asked if she was serious because I mean c'mon it is Femi One.

Winnie confidently replied saying that she could put her money where her mouth was at. "I'll wash her..."I'm talking about lyrical skills"  Raila's baby girl replied.

" The best male rapper, best female, best president, best... best first daughter...and continue..."  Winnie replied before he cut her off laughing together with his camera man as they both voiced their objections saying it was not possible.

" Ata ukitry kufight anza huku chini...anza na hawa hawajulikana (even though you're trying to fight, start small. Start from the bottom... start by challenging these small artists who are not well known) Femi... Femi would be hard... that would be a mistake," he said between light laughs.

Before adding that Femi is currently the best female rapper in the country undisputed.

Winnie clearly not baking down and very so much full of herself declared, " but you do not know what I can do."

"I do not know but I know what she can do... so yeah... but Femi umeskia?" Mwafreeka finished off.

I for one would be willing to pay money to see this rap battle!

not only features Raila but other politicians in his corner like Hassan Joho and Babu Owino.
Entertainment
3 months ago

PHOTOS: The beautiful cakes counties made for Raila

Raila is set to celebrate his birthday at Bomas of Kenya where a beautiful gigantic cake is set to be cut and enjoyed by those present including top ...
Entertainment
5 months ago

The 16-year-old rapper performed his hit song 'Cheza kama wewe' before posing for a 'Ngumi jamo' photo. The form two student rose to fame during ...
Entertainment
6 months ago
WATCH: For the latest videos on entertainment stories