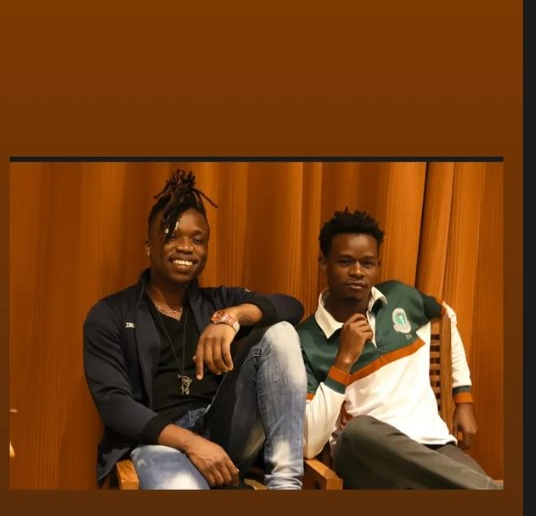 Kenyan content creator Flaqo Raz is making headlines yet again but this time round it has nothing to do with his content but more to do with YouTuber Cocktail fire who is a very disgruntled young man.

And that is not all, apparently, after the two started hooking up, Keranta left Cocktail officially for Flaqo. Cocktail insisted that the two were trying to keep their relationship on a low because of Flaqo's brand and business engagements,

In a set of angry rants on his Instagram stories, Cocktail revealed that Flaqo is the reason why he is no longer with Keranta.

Cocktail wrote, " I loved Keranta. He is my homeboy, I wonder why he went after her yet he knew we are together. Betrayal 3D" 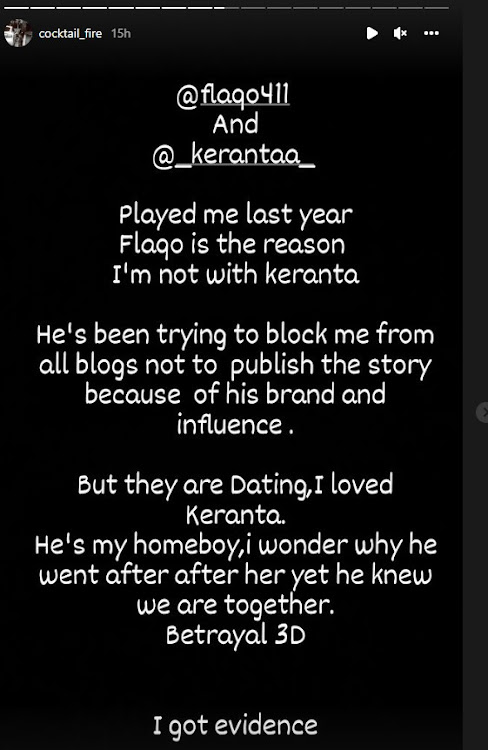 Cocktail then posted a series of videos of him and Keranta being all lovey-dovey followed by a video of them together with their squad having a good time as Flaqo pretended to be Cocktail.

Cocktail who is also a producer at Film Stylist met with Keranta in Kisumu over a year ago and the two apparently started dating shortly afterward.

Flaqo has time and again denied that he and Keranta are dating, referring to her as his "home girl" a sign they were just besties

Last month during an interview, Flaqo said that he was single and currently not seeing anyone.

"So that is why I'm normally around Keranta so much... also the agent who directs my shoots and Keranta's creative is the same person. Yeah... so... that's it. Plus I edit some of her videos," Flaqo added in a bid to clear the air and reassure their fans that there was nothing going on between the two of them.

On whether he had ever tried shooting his shot or tried getting out of the friendzone corner, Flaqo laughed adding that he and Keranta were cool like brothers and their relationship was purely platonic.

'Aahh Keranta ni boyz...  Keranta ni boyz. By the way mnaulizanga hii swali sana," Flaqo said clearly short of words and intent on not saying the wrong thing or probably revealing too much.

He however admitted that the future is always full of surprises so he can not totally rule out the possibility of something happening. But as of the now... the present, he and Keranta were just cool friends and work buddies.

Keranta has not spoken about the issue at hand but has been posting cryptic and shady posts on her Insta stories all day long.

Is this another Sean Preezy/ Shaq the Yungin script? Was something already in motion?

Guess we'll have to wait and see what this episode of Kanairo dating holds as Cocktail promised to give more details tomorrow.

Speaking in an interview over the weekend, Flaqo said that, at the peak of his career, he landed so many endorsement deals that it was turned into ...
Entertainment
2 months ago

Sad man learns he was just a friend after gf cheated

Did someone do something and you want to know why they did it? WhatsApp us on 0702946100 with the details
Trending
3 weeks ago

It was not a romantic relationship. I never agreed to stay with him till marriage.
Trending
2 months ago
WATCH: For the latest videos on entertainment stories