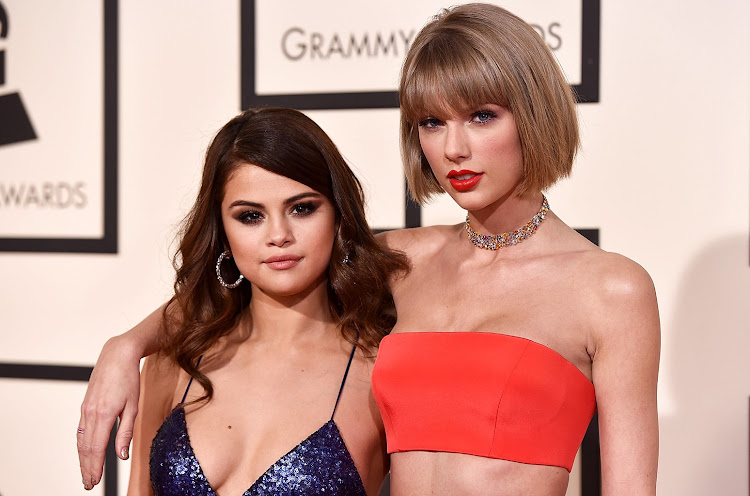 The star took to her Instagram page to share two photos of herself and Taylor Swift, 32, where the two looked candidly gorgeous enjoying a late summer dinner in an outdoor setting that looked like a page from a Disney movie.

Gomez smiled brightly as she embraced her BFF while Taylor in mock surprise has her mouth open forming an "O" while holding up three fingers.

In the second smile, the "Heart wants what it wants," hit-maker is seen in bouts of laughter as she tries to cover her mouth while Taylor smiles like she has won while giving a thumbs-up to the camera.

Their fans were beyond elated seeing the two together as the ladies have been friends for more than a decade.

A connotation of joining their first names together.

The two talented songstresses first bonded back in 2008 when they were both dating members of The Jonas Brothers (Gomez was seeing Nick Jonas while Taylor was dating Joe Jonas).

“We actually dated the Jonas brothers together! It was hysterical,” Gomez revealed in a past interview when asked how she and Taylor first met each other.

In a 2020 interview with The Wall Street Journal Magazine, Taylor revealed that she knew her and Selena were a forever kind of pact from the moment she met her.

“I knew from when I met her I would always have her back. In my life, I have the ability to forgive people who have hurt me. But I don’t know if I can forgive someone who hurts her.” Taylor gushed.

Selena added that Taylor has always been her pillar. Noting, “it’s been proven year after year and in every moment of my life that she is one of my best friends in the world. We don’t agree on everything, but we respect each other with everything.”

Their friendship has blessed us with numerous onstage performances of the duo and other big celebrations.

As well as Selena making an appearance in the role of Arsyn in Taylor's famous “Bad Blood” music video from 2015.

Khaligraph Jones is seen receiving a birthday cake gift from Ndovu Kuu in addition to a pair of Timberland boots.
Entertainment
2 months ago
WATCH: For the latest videos on entertainment stories