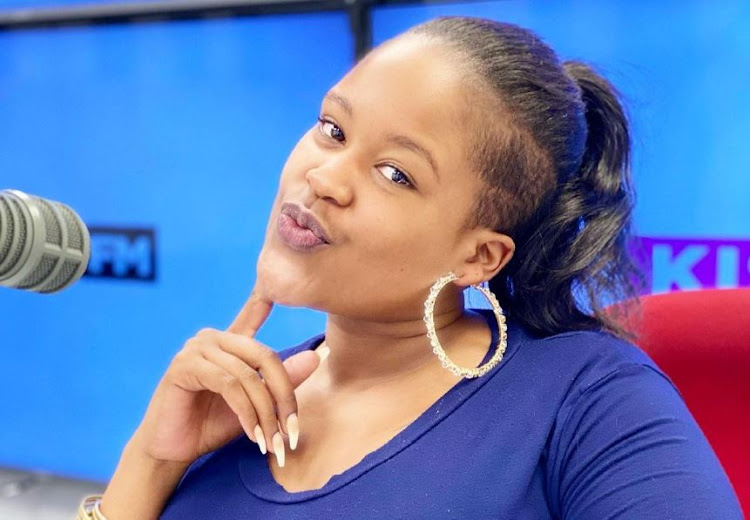 Well our Babes CEO, Kamene Goro has a list of do's and don'ts for the male gender and wueh... that is all I can say.

Today on air Kamene detailed her list of things that a man shouldn't do.

"I have a couple of things that you should never be found doing. First off, no piercings around the nose area. Around the nose and mouth that is a big no." Kamene said.

Obinna quickly cut her off asking, " wacha wewe, what if someone likes rock music?"

Kamene maintaining her stance said one can like the music without the piercings. " Anything between your nose... no and also the lower lip piercing, can't do it."

She quickly moved on in her list of don'ts." Number two, boy child you should not be caught taking a selfie...."

At this point her co-host was not having it. Obinna burst out asking then what was the essence of the camera app in the phone.

Kamene adamantly said that selfies were not meant for men.

" Sasa kama huna mtu wa kukupiga picha Kamene (what if you o not have someone to take pictures of you?)"  Obinna asked.

Kamene went on to highlight that men look stupid taking selfies and when they post them.

" Oohh so you want to take selfies, post them on Instagram show them how you look like a snack  and all that? Have you ever seen how you look? A whole 32-year-old, 6 foot something..."

Before she finished her statement Obinna took his phone out and started taunting her, " I think I should actually take one right now..." Obinna said mid laughter as an angry Kameicrediblyne threatened to throw his phone away.

She went on to add, "and you can not! You can not use filters or model with your face unless you are a professional model. Especially this thing where you raise one eyebrow... big no!"

Obinna revealed that he actually uses filters and has fun with them, a statement that incredibly shocked his co-host.

Kamene finished off by saying men should not take more than 30 minutes to get ready.

What are your thoughts on this?

Obinna says not any man should have any business enquiring about a lady's body count.
Entertainment
4 months ago

Kamene: 'Boychild should treat a lady they way she treats herself'

‘How to treat a woman’ has been a narrative since time immemorial where some individuals follow their own advice while others keenly take note from ...
Entertainment
4 months ago

complaints from ‘Boychild’ stating that young and pretty ‘babes’ aren’t informed in relevant current affairs.
Entertainment
6 months ago
WATCH: For the latest videos on entertainment stories