Redsan: Why Muhammed Ali’s walk of fame star is on the wall & not floor

Redsan is currently in the USA for his summer tour 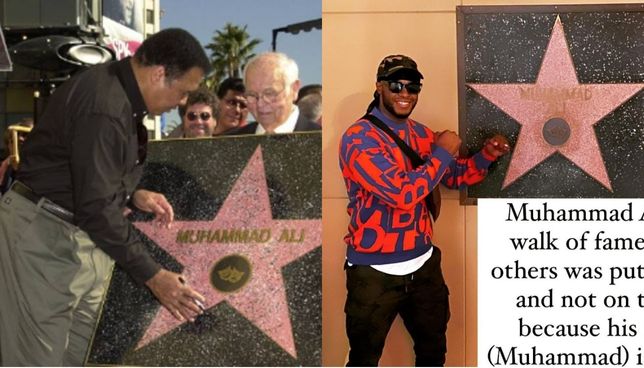 Kenyan dancehall king Redsan has explained why the Hollywood walk of fame star for world-renowned boxer, the late Muhammed Ali was put on the wall and not on the ground like others.

Ali's star was mounted on the wall because of the respect his name (Muhammed) has in the Islamic religion.

"Muhammed Ali’s star on the walk of fame unlike others was put up on wall and not of the ground because his first name (Muhamed) is actually the name of the last beloved prophet sent by Allah unto mankind, and the name Ali belonged to the prophets companion, so for this reason only he refused his name to be put on the ground and walked upon,” Redsan expounded.

Muhammad Ali received a star on the renowned Hollywood Walk of Fame in 2002, however it wasn't like the other ones.

The Kodak Theater entertainment complex broke its custom by mounting the star on the wall rather than the ground.

In 2002, Ali made a request that his star at the Hollywood Walk of fame be put on the wall so that it’s not walked on by people who did not respect him.

The heavy weight champion maintained that he bears the name of Prophet Muhammed and therefore his star needs to be treated or handled differently.

"I bear the name of our beloved Prophet Muhammad, peace be upon him, and it is impossible that I allow people to trample over his name,” Muhammed Ali requested.

The American boxer passed away on June 3rd, 2016 at the age of 74, after being admitted to hospital with respiratory problems.

Approximately 24 superstars are chosen each year by Hollywood Chamber of Commerce to receive a star on the 1.3-mile-long Walk of Fame, and it takes more than just appearing in one or two outstanding movies to be eligible.

There are more than 2, 700 stars on the Hollywood walk of fame.

Mike Tyson speaking with a therapist on his podcast aid he had noticed parts of his body  deteriorating recently which led to him wondering how long ...
Trending
2 months ago