Hushpuppi was entenced to 11 years in jail by the US Central District Court in California over fraud and money laundering. 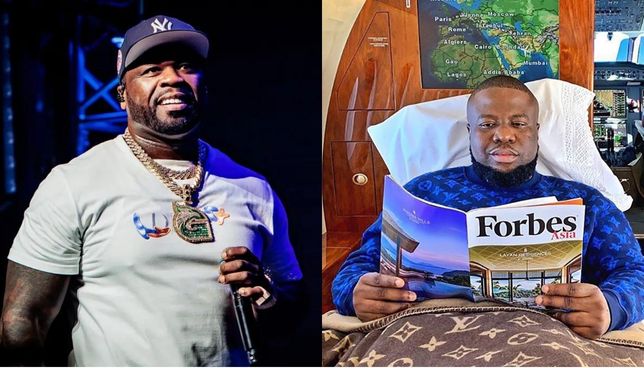 American rapper, actor, and businessman 50 Cent has announced that he is making a TV series about the life of notorious jailed Nigerian fraudster and Instagram influencer Hushpuppi.

It has sparked a debate online with some supporting the idea, but others opposing it, saying it makes Nigerians look bad.

Posting on his Instagram page, 50 Cent, whose real name is Curtis Jackson, said he had to do it: "For my scammers I gotta do this one, Hushpuppy series coming soon !"

The rapper has a history of producing TV shows, including the drama series Power, which first starting airing in 2014.

Hushpuppi, whose real name is Ramon Abbas, is currently serving 11 years in a US jail for his role in an international fraud syndicate.

He was also famous on Instagram where he used to flaunt his vast wealth to his 2.8 million followers, until he was arrested in Dubai in 2020, and his account shut down.

On Twitter some people are showing real excitement: "Can't wait to see what 50 will give us on this!" one person said.

Another said 50 Cent should "beat Nollywood to it".

However, others have expressed discomfort, with one tweeter saying: "Why not look around you and do a series on something that speaks positively about us Nigerians, as there's so many around you and all over the world".

The rapper's eldest son asked his father to forget the image he has of him as a kid, and to have a sit down with the 'grown-up, 26-year-old Marquise'.
Trending
1 month ago

50's oldest son Marquise Jackson, said he'd pay his dad what he used to pay in child support just to get a day with him
Trending
1 month ago

It appears nobody, not even the mother of his son is safe from the internet trolling of Curtis James Jackson III, popularly known by his stage name ...
Trending
2 months ago