The video of a priest purportedly dedicating the new club has caused uproar. 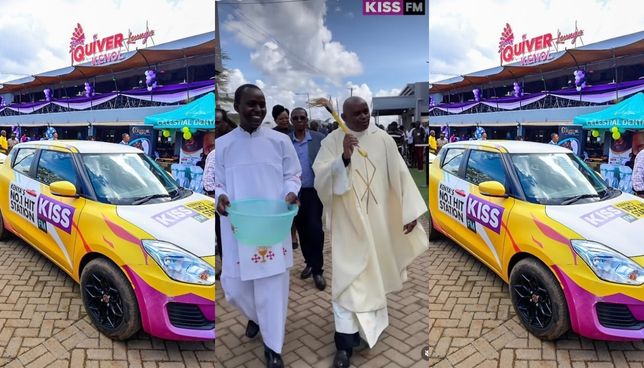 The management of Quiver Lounge has been forced to set the record straight after a video of a priest purportedly dedicating their new club in Kenol went viral.

The general manager of the venture sought to clarify that the priest was invited to pray and dedicate the whole building that happens to house many other businesses - Quiver is just one of them.

"Quiver Lounge happens to be one of the many businesses on which the new mall sits. The businesses there range from supermarkets to petrol stations, as you'd expect in any mall. Therefore, the mall owners, who also happen to be the proprietors of Nokras Hotels and Magunas supermarkets, simply sought the services of the Church in dedicating the mall to God." General Manager Joseph Ng'ang'a told Citizen Digital.

He continued; "And that's how Quiver Lounge was captured in viral videos while the priest did his thing. This was absolutely not a Quiver Lounge initiative, but that of the mall owners under which the club falls,".

The owner of the Lounge, also added that “While Quiver Lounge is a nightspot, it also enjoyed the blessings from the priests since it's also part of the many businesses the Murang'a mall hosts. "

However, the management also said that they did not know the coming of the priest during the grand opening.

"We have always sought pastors to pray for our nightclubs every time we open a new branch. This is a business like any other,".

On Friday, Kiss 100 Presenter was part of the crew that was on the ground during the Quiver Lounge launch in Kenol and shared their viral video on their platforms.

The video elicited mixed reactions online, forcing the owners of the lounge to set the record straight.

Just when you thought you had seen it all then boom along comes a catholic priest blessing one of the most controversial clubs in Nairobi!
Entertainment
2 weeks ago