Her death was made public by Dennis Itumbi who eulogized her as a good friend. 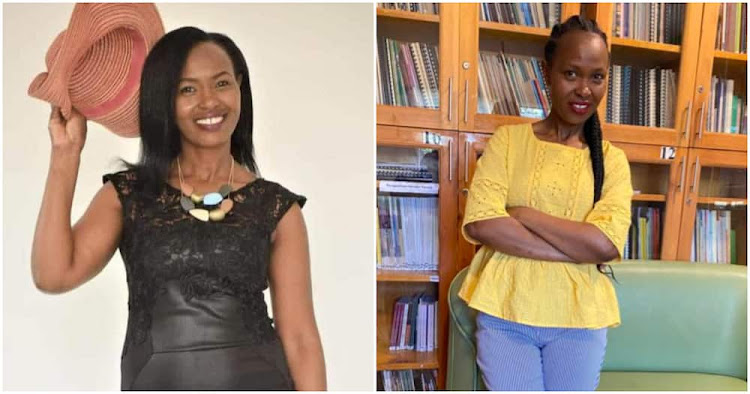 The reporter died during childbirth on Friday. She welcomed a set of twins making her a mum of three.

Her death was made public by Dennis Itumbi who eulogized her as a good friend.

"There are people who we meet and make our friends, then there are those who become our friends before our first meeting. Those that fill our lives with a desire to fight just once more...those who just text and say, " I called to slow you down by saying Hello...."Then one day, you go to a WhatsApp group and you meet the news that she will never call again.

She is gone. This one has literally slapped me to the reality that we are here, under the sun, for just, but a while. I will pen tributes all Weekend. Because you were Evelyn Ogutu.

Daamn! No, I will not write Goodbye yet, let me just hold a little bit, against all hope, there is a possibility it is not done yet."

"It is unfortunate she rested yesterday. Her Mansion in Heaven was completed, just before she got her keys to her earthly home.

Her legacy will forever be written in that brick-and-mortar. I continue to mourn a simple, humble, and visionary friend. Rest where it rains Evelyn Ogutu."

Dennis and Ogutu became friends in 2017 adding that the two have been friends since then.

"2017. There was a heated political debate in a WhatsApp Group. Raw. Fast and at one point so intense.

At that point, Rantai Lekana, (EveOgutu) side-chatted me with a plea." I know you can introduce a diversion, please get us out of that debate...

It was easy to change topics. I suggested in the group that despite our Political differences. We should form a separate Economic Group chat." I agree," Eve wrote in the group, "we are all united by our dreams and desires to build a better future."Of course, some noted the attempt to divert from the heated political debate."

Itumbi further revealed that Ogutu was almost moving in into a new house that she had worked so hard to build.

"Finally, what started as an attempt to calm down an exchange became a serious thing. We appointed TKB our chairman.

A WhatsApp group started among people who shared a profession, some a workplace, and others did not know each other well.

We decided to save a monthly amount. Shortly, we were opening a joint account, the next moment we were buying land and in the last few days, we were approving Designs of houses because over the years we have saved enough to build our homes as majirani in a neighborhood we would never have considered before that Eve Moment.

We have not always had money, and it has been tough to keep up sometimes, but somehow, a WhatsApp Group that decided to look beyond politics - by the way we still support different candidates - is just months away from owning our dreams.

May she rest in perfect Peace.

Yoh! This week on our hot and entertaining segment #TheKissRoundUp we focus the spotlight on top stories making headlines in the Entertainment ...
Entertainment
4 weeks ago