R. Kelly's former manager has been sentenced to 20 months in prison for stalking and harassing one of the singer's victims. 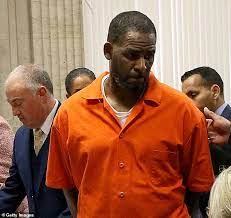 R. Kelly's former manager has been sentenced to 20 months in prison for stalking and harassing one of the singer's victims.

Donnell Russell pleaded guilty in July to using threats and intimidation to silence one of the women Kelly abused.

Using an alias, he published explicit photos of her online in an attempt to stop her testifying against his client.

Kelly was ultimately convicted of sex trafficking and racketeering and sentenced to 30 years in prison.

Prosecutors said Russell, a self-described manager, advisor and friend to Kelly, used "reprehensible" tactics against the unnamed victim and her mother, after she filed a civil case against the singer in 2018.

He continued to harass them when it became clear that she was cited in New York State's criminal case against Kelly, and was likely to testify.

Between November 2018 and February 2020, Russell threatened to reveal sexually explicit photographs of the woman; sending texts that read: "Pull the plug or you will be exposed".

In 2019, he created a Facebook page under the alias Colon Dunn, and posted screenshots of text messages between Kelly and the victim, including the same sexually explicit photographs.

He later appeared on two separate YouTube broadcasts defending Kelly, where he again displayed the photographs.

Ahead of his sentencing, Russell's lawyers argued he should not receive jail time, saying he had led an "otherwise exemplary life" before "crossing the line in his attempts to curry favour with Robert Kelly".

But prosecutors disagreed, saying it was important to show victims the law was on their side.

"The punishment meted out to the defendant today is a victory for crime victims, particularly those of sexual assault and abuse, who are often reluctant to come forward to law enforcement or pursue legal recourse, given the trauma and fear of retaliation associated with publicly discussing their experiences," said Breon Peace, US Attorney for the eastern district of New York.

Separate from the stalking charges, Russell was also convicted in July of making a hoax call, claiming that a gunman was about to open fire on a Manhattan theatre that was about to premiere the Surviving R Kelly documentary that ultimately prompted criminal charges against the singer.

He will be sentenced on those charges next week.

Kelly was one of the biggest R&B stars of the 1990s and 2000s, scoring hits like I Believe I Can Fly, Ignition (Remix) and Bump N' Grind.

Although rumours of sexual misconduct followed him for years, he evaded charges until 2019's Surviving R Kelly documentary prompted prosecutors to appeal for victims to come forward.

Sentencing is due in that case in February 2023.

Woman says R Kelly had sex with her before 18 years

Before R. Kelly was given a 30-year prison sentence on Wednesday, some of the women who had been assaulted
Trending
5 months ago