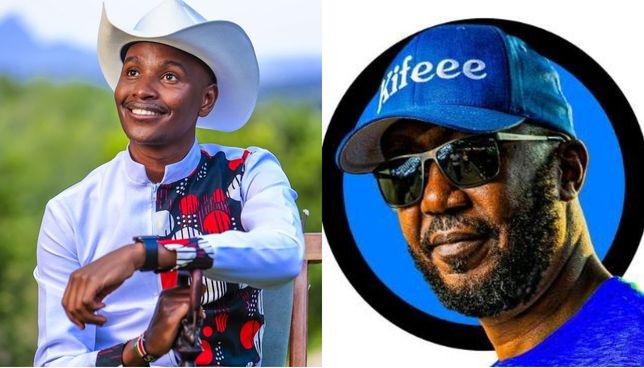 Samidoh’s savagely claps back at Andrew Kibe after he attacked him
Image: INSTAGRAM

Mugithi artist Samidoh has savagely put former radio presenter Andrew Kibe on blast after Kibe launched a series of attacks on him.

In case you don’t know how the beef originated let me bring you a little up to speed.

Kibe took to his socials to narrate how he had invited Samidoh to his show while the artist was visiting the United States but Samidoh declined and opted to hang out with ladies.

The content creator went on to add how he felt sorry for the singer as he was talented but was losing focus due to his love for women.

“Last year or was it this year…. I’m not sure. I asked Samidoh to come and I show him around during his weekend off when he is here for the tour.

Just to show him how rich gang lives. I was going to host him," Kibe started off.

He went on to add that the artist turned him down so as to go hang out with women.

I am the one who is supposed to know who to date and when and not the other way round.

Samidoh you are weak. You are talented but your whole energy, you have given it to three women.

Just look at you! You need some whips ." An angry Kibe ranted.

Well Samidoh was not going to let that sit.

Taking to his socials he went on to reveal that he turned Kibe down because he’s a kept man and Samidoh in his glory would not feel comfortable hanging out with a man in a house that a lady caters for.

Wueh! Talk of a nasty clap back!

“Haha kwani unataka? So, I was to leave my work coz a lad has invited me over to his cougar's house?

Samidoh finished off by assuring Kibe that he’d visit him once the content creator gets his own place.

“Sasa ningekuja aje kwa nyumba ya mama bro? (How would I have visited a house that belongs to a sugar mummy) How would we have even shared a drink? That's not manly bro. Tulia(relax)."

Karen Nyamu has had to fight with Kenyans online who have been peddling conspiracy theories about her recent trip to America.
Trending
2 weeks ago