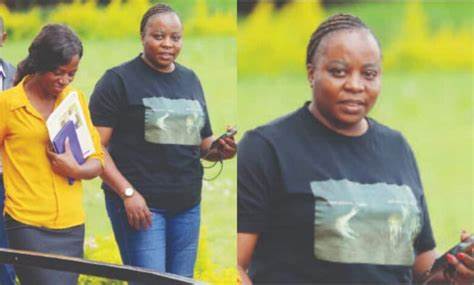 A Kenyan woman identified as Primrose Nyeri Mwangi is currently facing criminal charges after allegedly hacking a Zimbabwean and fraudulently transferring $120 million (that is approximately around Sh.14 billion) from the government agency's bank accounts.

The 40-year-old lady is accused of being involved in the hacking of the systems at Zimbabwe's Manpower Development Fund (Zimdef) and fraudulently transferring $120 million (approx.Ksh14 billion) from their accounts.

So Kenyans have decided robbing their own is just not fulfilling as much and they're going to branch out huh?

Primrose is believed to have had two associates that helped her obtain codes to siphon money from the organization's accounts.

No, but this sounds like a script off Money Heist, right?

But guess this, Primrose isn't just a nobody. The lady is the director of Primkett Travel and Tours and Maffkett trading, just the rich trying to overfill their pockets.

In a bid to cover tracks, she is accused of transferring 2.4 Billion into the Steward Bank account of Maffikett Trading through the standard Zimswitch system, using Zimdef authority codes. Bad move, and I know we've all watched enough crime moves to know that.

Also, she is in business, you want to tell me she's never heard of off-shore accounts?

The other amount was transferred into Atrier Engineering CBZ account, Newplaces (Pvt) Limited NBS account, and Tavaka Holding NBS account. It's like she was just leaving breadcrumbs trail for the police at this point.

A state-owned daily newspaper in Harare reports that the crime was brought to light on December 28, 2022, by a whistle-blower who sent an email to the complainant alerting them of the transactions.

Her associates were named as Gerald Pondai and Prosper Hove but they've not yet been arrested as they're in hiding.

Out of the KSh 14.8 billion, only KSh 3.7 million has been recovered so far after the national Building Society reversed one of the transactions.

Primrose who was arraigned at the Harare Magistrates Court on charges of fraud is also charged with conducting business in Zimbabwe yet she was in the country on a tourist visa.

It was an embarrassment- D'banj's lawyer says following his release

US government sentences Nigerian fraudster Hushpuppi to 11 years in jail

Hushpuppi has been sentenced to 11 years in jail by the US Central District Court in California over fraud and money laundering.
Entertainment
2 months ago