Why I can't stick with one woman - Don Jazzy

Jazzy made it public that he was once married to an American model but got divorced to chase his music dreams. 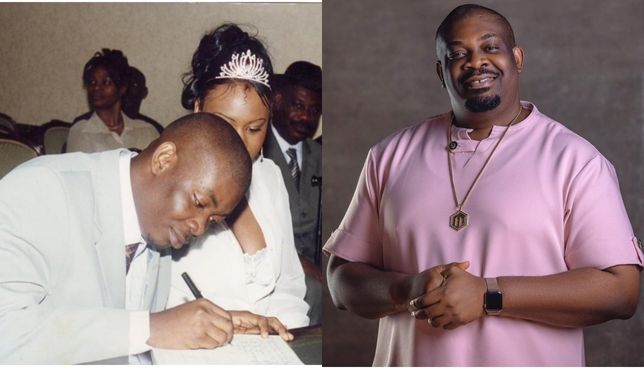 Nigerian music producer Michael Collins Ajereh aka Don Jazzy has explained why he is not ready to settle down again after his first marriage failed.

In a recent interview, Jazzy said that he can’t stick to one woman and that is why he has opted to abstain from relationships or dating.

"I wouldn’t be able to process the fact that if I like this person, every other person should go to hell. As of now, in my life, maybe when that butterfly hits me as it hits you people when you fall in love, I will then say, every other person is fucked, and this is who I like." Jazzy said while appearing on Nedu's podcast "The Honest Bunch".

The Mavin Records CEO acknowledged that he finds it difficult to comprehend the thought of being tied to one woman for the rest of his life.

However, he did not rule out the possibility of him falling in love in the future – but only if he finds the woman he loves.

He also gave reasons for why he thinks marriage has been misrepresented as a plan to fight poverty, which he thinks shouldn't be the case.

Don Jazzy emphasized that he wants a kind woman, understanding, and not a troublemaker when asked about the kind of woman he desires.

In April 2021, Jazzy made it public that he was once married to an American model but got divorced to chase his music dreams.

“For so long everyone keeps asking me when am I getting married. Well truth is almost 18 years ago I was 20 and I got married to my best friend Michelle @yarnstaswitch and it was beautiful. I loved love and I loved marriage. Michelle is soooo beautiful inside and outside with such a soft heart. But then me being so young and full of dreams I went and fucked it up cos I was giving all my time to my Music," he said in part.

"Music became priority instead of my family. We got divorced when I was 22 and it hurt. I am still very much in love with my music and I wouldn’t want to marry another and fuck it up again. So I’m taking my time. Why am I just saying this now?? I really like to keep my relationships private actually. Past or present. But I was watching the bounce interview with Ebuka which is almost like a tell-all interview, and I felt bad skipping this huge part of my life. So yeah make una no vex o,”.

Kenyans have been doing the most to justify why only two Kenyan songs were on the top 100 Kenya Apple music.
Entertainment
4 months ago