The female examiner, who is a Kiswahili teacher, is seen picking clothes from a hanging line which included inner wears, face towels and blouses. 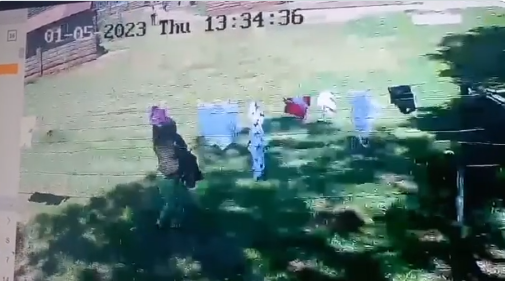 A KCSE examiner is under investigation after being caught on CCTV camera allegedly stealing clothes at Alliance Girls High School.

In a viral clip on Thursday, the female examiner, who is a Kiswahili teacher, is seen picking clothes from a hanging line which included inner wears, face towels and blouses.

She walks towards a hanging line, with some clothes on her shoulder, before looking around and picking the clothes.

Speaking to a local media house, the school's administration said they had dealt with the matter, before handing the examiner over to the authorities.

"The case was handled as a criminal matter and given the right attention by the security officials at the examinations centre," it said.

After being caught, the teacher was asked to write a formal statement on the alleged theft.

Sources told the Star that her colleagues were able to identify their clothes picked from the hanging lines.

The incident comes a month after a police officer was arrested in Bomet County, over alleged theft from female invigilators.

This was at Kimulot High School in the Konoin constituency, during the KCSE exam period.

The officer was caught on CCTV ransacking the handbags of female invigilators, who said they had lost money.

Gospel artiste and food blogger Holy Dave appeared before a Kibera court for allegedly assaulting a businessman at a club in October 2022.
Entertainment
3 weeks ago

In the photos, Karuri seemed to have gone to visit his grandma
Trending
3 weeks ago