He thought I am ratchet'- Kamene on DJ Bonez 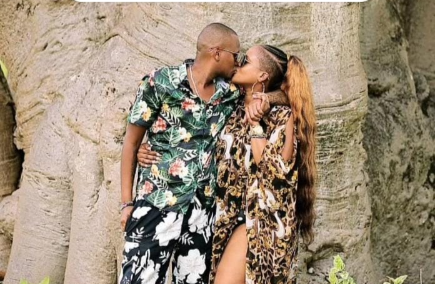 Speaking during the Morning Kiss, Kamene disclosed that she has known Bonez for almost 6 years, despite them dating for two.

Before then the spin master was not her cup of tea.

"I have known him for like five or six years. We did not like each other at all. We had mad beef, he used to say am ratchet.

Kamene also told off people who claim she lied to them that men are dodges.

"Some were criticizing me for 'lying ' to them about men yet am dating. I feel like people are just hallucinating. I always advocate for one thing 'good love.'

The couple has no kids together.

In a past Q and A segment, Kamene said she would never want to get kids out of wedlock

"I am not pregnant and not anytime soon. I don't want kids out of wedlock and so, I will have to get married first, settled into married and then think about having kids."

Another one asked her if its true she removed her uterus.

"Fiction. Nipeleke wapi? but i had actually thought of doing it, but i need to be 35 before it can be approved."

She also denied being a snob but said she prefers people not invading her personal space.

Kamene was married in the past and the nasty experience she went through might have left her traumatized.

Kamene is currently dating popular DJ Bonez who engaged her a few weeks ago.

She has denied the claims that she is under pressure to get married after hitting 30 years.

"I have no pressure with my age...I'm easy either way."

Obinna's advice to Kenyans after rise of Super Gonorrhea

Kiss FM presenters Kamene Goro and Oga Obinna have reacted to the news of the rise of super gonorrhea.
Shows
4 weeks ago