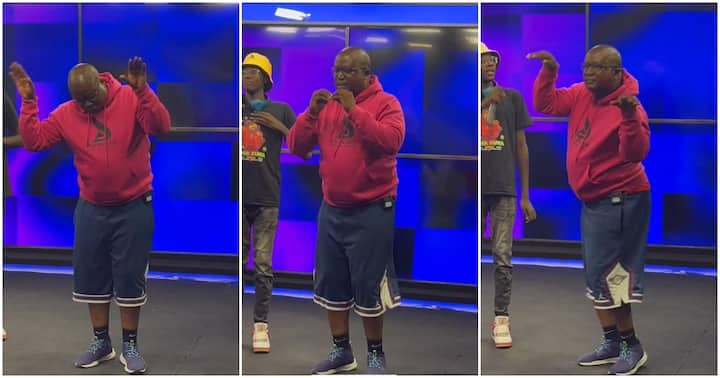 Chief John Ogilo Migun, during a past Interview
Image: INSTAGRAM

"Kuna Kuna" hitmaker Vic West has thanked the viral dancing Chief John Ogilo Migun for helping his song blow up on the internet.

Mr. West gave the Miondoko chief his flowers for helping market his song.

Vic West said, "When his video went viral, we added two million views on YouTube. Like we went from 8 million to 10 million views. He is the one who made us cross over."

The hit song features other Kenyan artists such as Fathermoh, Savara, Brandy Maina, and Thee Exit Band and has become very popular with several choreography moves being made for it on TikTok.

The video of the middle-aged man happily dancing vigorously to the popular hit song 'Kuna Kuna' while being perfectly in sync with the song's dance moves had netizens going crazy.

Speaking about the video, John Ogilo said the video wasn't a planned thing. Adding that he was actually on undercover business in the club.

"The video was totally random I had not planned for it. We had finished doing our patrol and in the evening, we went to have late lunch then we entered there where we were conducting some undercover investigations on drug abuse."

Migun says that he has broken the ice with residents and the youth who "feared him" and now have much freer interactions.

Migun says that his war on combating drug abuse in the area has been made easier now that he easily gains access to information on the joints where the substances are sold.

The Kenyan club banger that was released just 3 months ago currently has over 10.8 million views and over 68 thousand likes on YouTube and it's the number one top music video in the country.

Burna Boy kicks fan in the face during his Lagos concert

Former Nairobi Governor Mike Sonko has advised Karen Nyamu to focus on politics and avoid unnecessary drama at all costs.
Entertainment
1 month ago