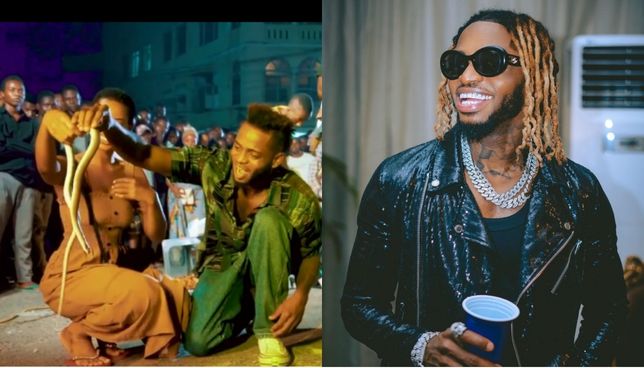 WCB President Nasibu Adbul Juma aka Diamond Platnumz has made known his fear of heights.

According to Simba, he would rather chill with 100 snakes in a room than attempt to ‘kill’ his fear of heights.

Research shows that those who are afraid of high places suffer from a condition called Acrophobia.

Acrophobia is a mental health condition in which the individual experiences an intense fear of heights.

It's a type of anxiety disorder. A person with acrophobia experiences intense fear and anxiety when they think of tall heights or are positioned at a significant height.

“Gimmie 100 Snakes I can chill with them in the room but Heights, Hell No!... Even Standing on top of the Table feels like a suicide attempt to me, because I have acrophobia... You can imagine how stressful this one was🤦🏻‍♂️,” Diamond Platnumz shared.

In the shared video, Platnumz was attempting to climb on top of a building as they shoot the video for his new song.

Just the other day, Diamond announced to the world that he had adopted a snake as his pet. He shared a video playing with the said snake that he described as a friend.

“Have been always excited to have my own snake as a pet ❤️🐍... guys meet my new Friend #Chichi,” Diamond Platnumz wrote.

Award-winning star Diamond Platnumz has revealed that he once dumped by his first girlfriend Sarah for being broke.
Entertainment
2 weeks ago

Fans react to Diamond Platnumz getting a pet snake