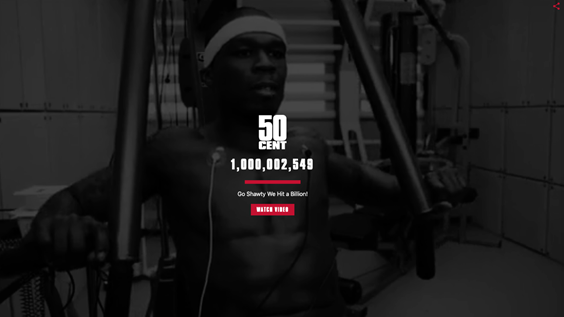 Reaching 1 billion views on YouTube, “In Da Club” is the second Rap/Hip Hop music video from the Pre-YouTube era to achieve this milestone. The first being Eminem’s “Without Me”.

50, real name Curtis James Jackson III, joins a diverse and elite group of artists from this era to do the same, including Nirvana, Queen, Guns N’ Roses, Whitney Houston, The Cranberries and a-ha.

The video for “In Da Club” was directed by Philip Atwell (Eminem, Dr. Dre, Snoop, etc) and won Best Rap Video and Best New Artist at the 2003 VMA’s and was nominated for Video Of The Year.

50 is an award-winning rapper, entrepreneur, actor and producer who is recognized as one of the most talented and prolific music artists of his time.

He rose to fame with his record-shattering debut album, Get Rich or Die Tryin,’  which has since sold more than 30 million albums worldwide and has been awarded numerous prestigious accolades.

Singer, Jeremih is one of the many celebrities who have come out to say they are battling with COVID-19.
Entertainment
1 year ago