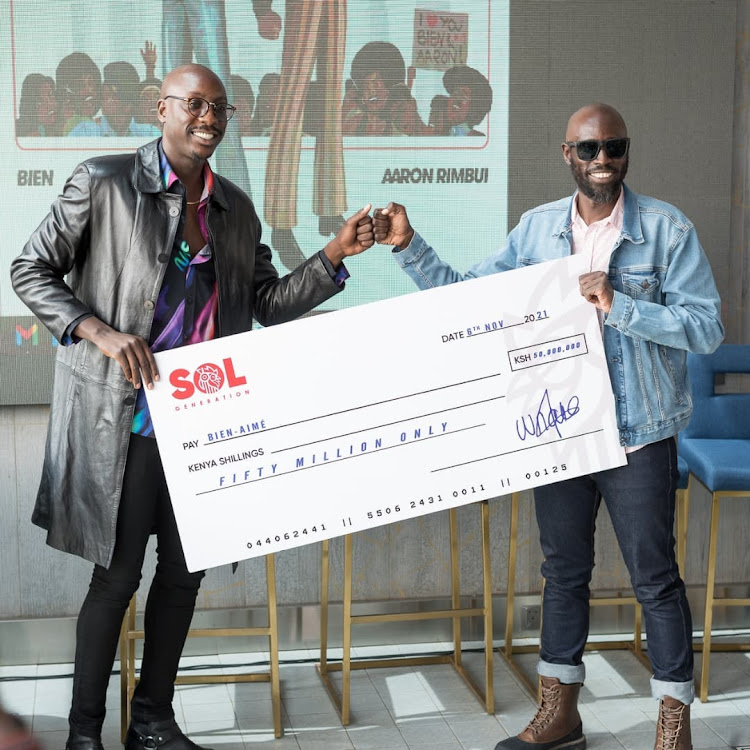 Sauti Sol member Bien Aime Baraza is the new signee to Sol Generation.  On Friday, Kiss100.co.ke witnessed the signing of this African Bald man to the label as a solo artiste.

Bien signed a three-year deal worth 50 million Kenya shilling which will see him record and release his solo music and albums under the Sol Generations outfit. Bien-Aime's project ‘Bald Men Love Better’ is the first release under Sol Generation Records through a joint venture with Exodus Entertainment.

Bien-Aime and Aaron Rimbui might seem like world’s apart but the longtime collaborators are a perfect show for soul meets jazz. Their first collaboration “Say Mama” was released in 2016. Aaron also collaborated with Sauti Sol on the original “Kuliko Jana”. Bien says, “We have always made music when we had the chance to break bread. He’s in Kenya right now visiting from New York where he lives and I am sure that for the 8 weeks he’s around we will be making music. Bald men love better tunes on the way.”

“Bien and I will always make art and music when we meet. We did a live recording for the whole album. It was a project of fast executions but you can feel the timelessness of it and I love it for that.” Bien adds, “When we started making the project, I didn’t know what to expect. We were not trying to exist in any genre and the music we made is not in any genre. I did not expect it to be that beautiful and I hope our fans, old and new, will feel the same.”

This comes after Sauti Sol announced their 'Alone Together' chapter. - the iconic Kenyan music group who will continue to serve their craft and brotherhood.

song is about making merry
Entertainment
3 weeks ago

I The journey is a 4-part open letter to their fans and the world to enlighten them on who Sauti Sol (Savara, Chimano, Bien and Polycarp) really are; 4 phenomenal parts that make 1 Iconic whole.

Father Studies by Fancy Fingers, Bald Men Love Better by Bien- Aime, Savage Level by Savara and Heavy Is The Crown by Chimano are masterfully crafted musical and visual works that are sincere representations of them as world-class artists.