It’s okay to buy alcohol in supermarkets, wines and spirits 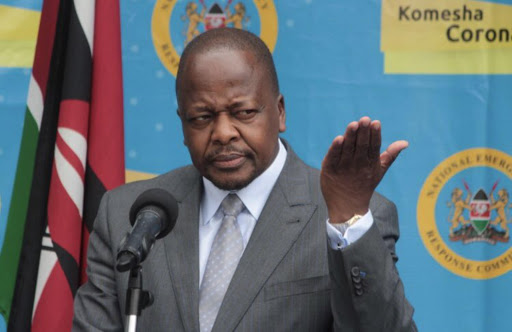 Health CS Mutahi Kagwe has warned against taking parties to households after the ban on alcohol sale.

President Uhuru Kenyatta on Monday ordered all bars to be closed indefinitely, adding that those that don't adhere will have their licences permanently withdrawn.

"I hope some people are not thinking of a plan B of buying and taking alcohol and celebrating at home," Kagwe said.

Speaking during his daily brief on Tuesday, Kagwe said prohibition of the sale of alcohol does not mean that one can take alcohol to hiding places.

"The idea of prohibition of alcohol is to stop socializing so that you keep social distancing. You cannot take parties into your homes or carry your favourite drink to a hide out," he said.

Last month Kagwe expressed frustration at crafty Kenyans who were ordering as little as a sausage accompanied with two beers to work around state directives for eateries.

"Some are ordering just one sausage and two beers. They then hop into another restaurant and do the same. Others order oranges and two beers that are supposedly the dessert."

This was after the directive that alcohol could only be sold in eateries to accompany a meal.

But on Tuesday, Kagwe said this trend has to change.

"It has to be sausage mbili na soda moja when you visit the restaurants. If you buy alcohol and you take it home with a bunch of people transforming your home  to a party, you will be contravening the measures," he said.

"Forget about alcohol. If you are used to eating nyama choma with a beer, you can also take it with a soda," he said.

But he noted that people can still walk into a supermarket and buy the drinks.

"... the supermarkets and outlets such as wines and spirits shops must not be converted to parking lots for drinking sprees," he said.

Kagwe said that everything has a silver lining, adding that the era of alcohol drinkers with red eyes will become a thing of the past.

"These people will sleep properly and sleep early. At least we will see them with clear eyes,"he said.

Translates to: (We know some people who owned bars then started selling mandazi's with alcohol so that they can be seen as selling food, now we are saying that you will sell mandazi only)

The new positives were drawn from the 4,888 people whose samples were tested within 24 hours.