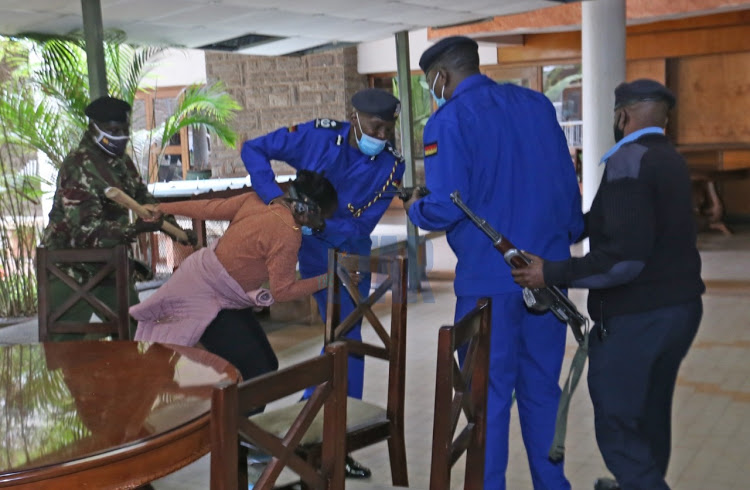 Ipoa has launched investigations into the assault of Mlango Kubwa MCA Patricia Mutheu at City Hall on Tuesday.

Chairperson Anne Makori says the authority has contacted some of the people who were present during the chaos  yesterday to establish police involvement in the assault.

Photos and videos of Mutheu being assaulted elicited anger among Kenyans with many uniting in calling against police brutality, as well as justice for Patricia Mutheu.

Below are some of the reactions from celebrities;

I always keep it clean always keep it positive and always keep it loving but what clean positive loving caption can i give this?I want all the people who speak up against violence against women to pick this up because violence against women doesn’t only happen in the home, women face it at work, on the streets, in the corridors of power and everywhere they go.These are very dark men with very dark souls broken and being used to cut everything they touch.Let your leaders know THIS IS A BAD IDEA and the entire police force needs to understand that each and everyone of them came from a woman’s bodyRESPECT ✊🏾 OUR WOMENThese policemen must be violent at home.This is a picture of what they do in their housesSo take a moment ladies and think are u safe in this space you call home (Kenya)And should u pretend nothing happened....?We saw a cop drag a woman with his bike just last monthLadies take a STAND

Frasha: Police brutality in Kenya is becoming insane .This is totally unacceptable over seven policemen beating up a helpless, harmless woman .This should be rebuked in the strongest terms possible is this the independence our forefathers died for #justiceforpatriciamutheu

Gender CAS Rachel Shebesh expressed her disappointment and at the same time raised her concerns over the presence of police in the assembly.

“ I have been appointed by the President and in my capacity, I cannot sit back because of the kind of force used against these women only because they are exercising their rights,” she said.

Nominated Senator Millicent Omanga also pleaded with Elachi to stop targeting women who are perceived to be a “weak link”.

She also put IG Mutyambai on the spot and questioned why police officers were allowed in the assembly.

“Even in Parliament we have our differences but never have we seen police being allowed in the National Assembly or Senate,” Omanga added.