Frankie apologized to both mothers of his children 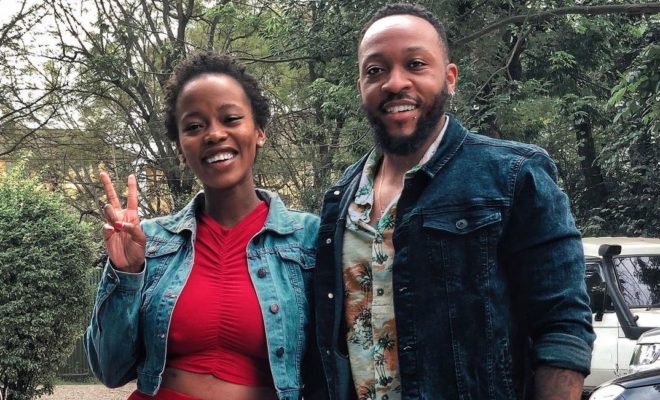 Frankie Kiarie with Corazon Kwamboka in the past
Image: Instagram

Frankie Just Gym It apologized to both his baby mamas; Corazon Kwamoka and Maureen Waititu.

This was after his interview with Tanzania's Simulizi Na Sauti, where he alleged that they both had a lack of father figure in their lives, something that contributed to the break ups.

This didn't sit well with Corazon as she took to social media to say that she had opened up about the issue to Frankie in confidence. Maureen chose not to address the issue in public.

In a separate interview with Lynn Ngugi, Frankie apologized to both mothers of his children.

"Corazon, It is unfortunate that things didn't work out like they were supposed to and we went through a lot after the breakup and I just kept spiraling down that I ended up losing myself. One thing I value so much with you is that you still allow me that access to the kids." He said.

"For the situation that happened before I fully apologize, that was not not something that I should have mentioned. I hope you feel better and I love you!"

"Maureen, I am definitely sorry for putting you through what you went through in terms of cutting you off. In that situation we could have had a much better bond and understanding. I should have treated you like the mother of my kids rather than treating you as just like my girlfriend."

This is how fans reacted;

Marygoretti Chepseba: Being rejected by your dad or mum whether in a broken relationship or marriage,,can really affect a child's entire life,,and future relationships subconsciously..May God help us to always think of the innocent before making any step in the wrong direction..

Ontitah Juddie: This was deep even for you Frankie to admit that you feel whatever you touch breaks is so much a thing to admit and people might judge you but never know that there are patterns especially when growing up. Think of yourself positively,work on you first because you can't pour from an empty cup then ask God to help you admit you need help and he will direct you Frankie. Most importantly you are in my prayers and don't give up yet.

Patricia Kamara: I have “love-dislike” feelings for this man. He is the villain you grow to route for. I see why any woman would just stick around.

Parabi: A man is who his mother makes him to be, because she controls the heart. He will demonstrate what his father did. But who he becomes from his mother. While a woman is who her father tells her she is.

Hilder Wanjiku: Bottom line, we are all human, we all have messed up in life.. Love and relationships are not easy. Listening to Frankie talk about his childhood, trauma is real and we rarely discuss this,we rarely take time to honestly talk how different backgrounds and upbringing affect us as adults. And no one really is without issues

Caroline Oguaru: It's admirable when a man owns up to his mistakes and strives to do better by his family. Thanks

Ceekay: My heart always bleeds for Maureen, she really went through alot with including the social media backlash. I hope he means it, but this is an example of why people need to heal their childhood traumas before having kids. Marriage and relationships are not something to take lightly and I hate when men get away with abusing women. Please heal before you bring forth a child.

Lisa: If all men could take responsibility for their actions! Kudos Frankie. This is a great step to raising your sons and daughter well. All the best as you figure out this very interesting yet misunderstood gift called fatherhood.

Winnie Masanya: Providing shelter for your kids is your RESPONSIBILITY as a parent. Don't expect to be applauded when doing your responsibility. Anywho, people deserve a second chance.

Ruth Nyagah: Frankie, you are an amazing soul few people would sit down and talk about their failures. Life has happened and the only way from here is up. Your children love you and am sure you will get to be able to access all of them soon. I will not judge you because this is a story, of so many people out here not to say it's right but we shouldn't cast stones at you like your situation is uniquely yours. All in all life is for us to keep trying to be better everyday. Blessings to you your children and I pray even your children's mothers could find peace and be ready to forgive and move forward.

Mum-Centric: Saying sorry requires courage. Saying it in public requires enormous bravery.If God forgives us when we repeatedly show up at his feet for forgiveness,we should too.Frankie more grace to you.we have all done things we aren't proud of.heal,learn and may the two women accept your apology. do better with the next one.

Eddna Makori: Life has no remote you have to get up and change it yourself, Frankie it's good to make peace with your past so it won't screw up the present thanks for realising your mistakes and asking for forgiveness

Doreen Mwenda: Never believe you're so great or important, so right or proud, that you can not kneel at the feet of someone you hurt & offer a humble, sincere apology

Tess Njokie: I applaud this move. The first step in healing is admitting you were wrong. My message to Frankie is to heal. FIND YOURSELF FIRST before trying to find someone else because you will end up injuring innocent souls who have nothing to do with your past. There are so many men out here looking for women to 'baby' them/hold them down because they don't feel complete by themselves. It's a good thing that he says he's working on healing now so he should just take his time. Take time off and be with himself...BUT, take care of your children while doing so! Wishing him and both families all the best

Frankie apologizes to Corazon and Maureen

Corazon hints she has a new man after Frankie's damning expose

Corazon Kwamboka is seething at the moment. The reason for this is her baby daddy's revelation this week about some
Trending
4 weeks ago