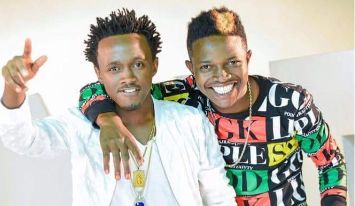 In an interview with Kalondu Musyimi, the 'Dawa Ya Baridi' hitmaker said their kids were the reason they reconciled.

" That was last year and the reason for making that step was first of all we are growing, we are no longer those young immature men,  tunaacha mambo mingi."

"We have children, they are growing, our children are they are the primary reason for reuniting,"

Seed told that it all had to do with back and forth between their fans over their children.

"Fans were going at each other comparing our children,  there's a group of people that would compare our kids . Bahati also experienced the same thing. Unapata watu wanaenda anatukanana watoi so it angered me.  I'm a family guy yaani mi napenda so long as you are in my circle you are my family and me I can do anything for you."

Seed said cyberbullying of their children made them resolve to reach out.

"So one day I decided it was too much, there were especially some hurtful comments, I think I called him and told him we needed to meet."

On the day of reconciliation, they spoke for over four hours;

"But we are thankful to God, it went well . It took us like four hours talking out issues yaani kila mtu akitoa kitu kwa roho"

Seed told that they suspected each other of sending fans online to attack each other.

"On his side he thought that I'm sending my people, on my side pia I saw like he was are sending his people to come and diss my family, we spoke and came out alright."

Seed is currently promoting his new track, a remix to his 'Dawa Ya Baridi' hit song featuring Guchi.