Glitz and Glam: How it went down at the FEMAs

It was all pomp and color on the red carpet as guests, nominees, artists, media personalities and music fans graced the event with the best of fashion and glam 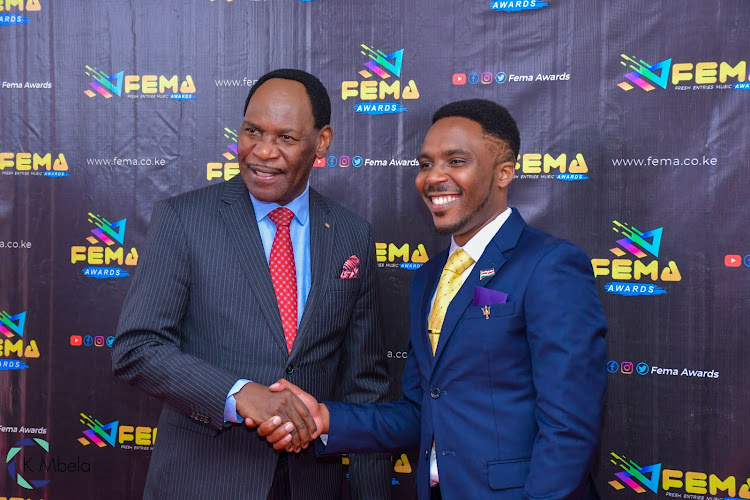 The awards founder, Nicks The President with Dr. Ezekiel Mutua

It was all pomp and color on the red carpet as guests, nominees, artists, media personalities and music fans graced the event with the best of fashion and glam.

The gala had a total of 702 Nominees, 50 final category Winners and over 1000 people in attendance.

Unlike most awarding ceremonies, FEMA recognized the 1st and 2nd runners up individuals with different customized accolades of achievement as well while all nominees received certificates of nomination.

There were other Honorary Awards such as Role Model, Life-Time Achiever, Ultimate Icon and Industry Supporter Award.

Eight Category winners received a recording deal of a full sponsored EP/Album courtesy of a partner while FEMA presented  Gift Vouchers to the Most Voted For Nominee.

The awards founder, Nicks The President said that the main achievement was to celebrate the embrace, confidence and trust that the awards has received from the fresh artists.

"Also the positive reports from nominees and winners about opportunities and chances that have opened up for them to improve and upgrade their craft in different ways both locally and outside the country. We give God the glory," he said.

Adding "This year's milestone has given us more confidence as a team to think beyond as we put plans underway for our forthcoming activities in 2023,"

Fans have described FEMAs as an award that is slowly taking over from Groove Awards.

Group of the Year - Tripple Vision

Band/Choir of the Year - YIC Band

Dj of the Year - Deejay Jephy

Emerging Dj of the Year - Hype the DJ

Audio Producer of the Year - SM On The Beat

Media Show of the Year - Link Up - Pearl Radio

Photographer of the Year - Tiampatiphotography

Stylist of the Year - Smiles Collection

Coastal Artist of the Year - Shamrock 001

Eric Omondi who was highly hyping the event says he never knew that Simple Boy had not been paid, pointing fingers at his management
Entertainment
1 month ago