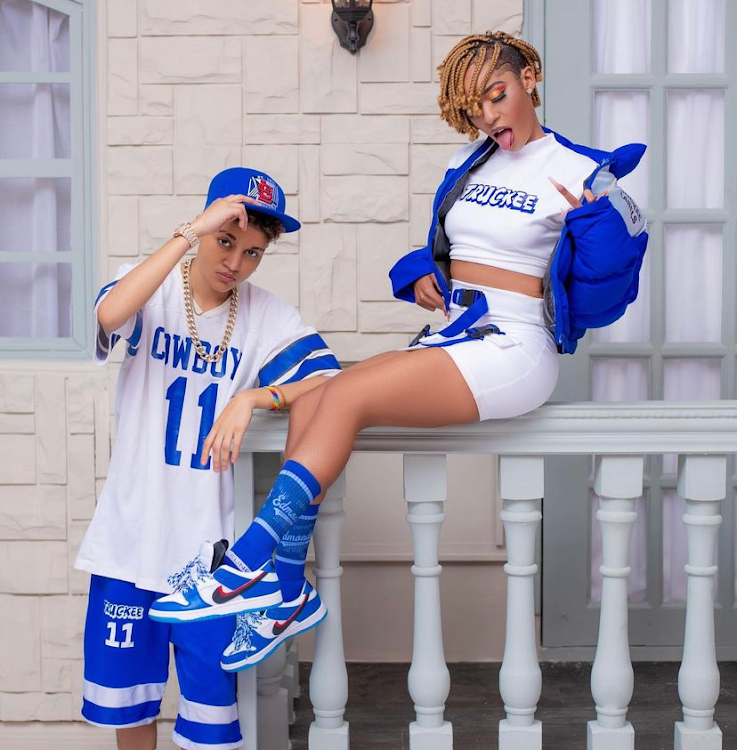 Kenyan recording and performing artist Noti Flow together with her partner King Alami, took to their socials to celebrate their first anniversary.

Their celebration comes barely a month after Noti announced she was tired of Alami and was choosing to be single as her significant other had hurt her so much.

On her Instagram Noti Flow posted a cute photo of the two of them in matching fits with the caption,

"Last year a day like this I met this headache, but there's no single day I've regretted meeting her ...can't picture my life without her now. she's my poison #happy1stanniversary to us."

Alami posted a photo of them with the caption,

"Happy one year anniversary to my Queen..she does everything and anything for me without asking. Some people believe there is one, The one who points your way to the sun. A person they believe makes them complete, the one who will support when facing defeat.

You are my angel, my one and only, my forever love, so we'll never be lonely. You've brought to my life all your love and care. It made me see when I realized how  rare It is to meet your angel, or their soulmate but I’m glad I found mine and it’s you @notiflow I love you so f*cking much and I pray we stay forever together ."

This comes after photos of King Alami in an adult escort site leaked and Alami confirmed that she was indeed an escort for old rich men.

The two reconciled and a few days later Noti said that Alami had lied to her about changing and apparently had opened another account in the adult site.

However, it seems the two are still together amidst all the drama.

The couple's series of breakups started last year when Noti had referred to Alami as a psycho as she narrated how Alami once got really violent after an argument.

Noti wrote, "We had a normal little argument and she went all rampage. She held knives at me and threatened to kill me and kill herself if I break up with her! She strangled me, so I couldn't scream for help! I was out of breath for seconds. Love doesn't just vanish no matter what someone does. It's unfortunate we can't be together."

But it seems all was not lost and the two are still crazy in love.

Noti who was celebrating her birthday over the weekend, said she spent Sh1.5 million on the gift and said her bae is totally worth it.
Entertainment
2 months ago

Chasing clout is the art of someone chasing power or popularity, on social media by use of deceit, either verbal or pictorial.
Entertainment
2 weeks ago
WATCH: For the latest videos on entertainment stories