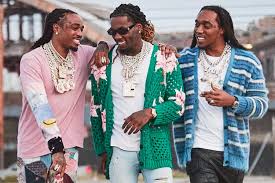 Migos fans across the globe are holding their breath following rumours that the internationally recognised rap group, might be heading for a split.

The rumours started when netizen sleuths noticed that Offset, one of the group members had unfollowed Quavo and Takeoff ( his fellow group members) on Instagram.

As if that was not bad enough, Quavo and Takeoff are also set to release a new song dubbed, 'Hotel Lobby,' without Offset.

As if that wasn't crazy enough, they are doing it under new names: Unc and Phew.

They made the announcement on the very day Offset unfollowed them.

Offset's wife, rapper and actress Cardi B rallied behind her man as she also unfollowed Takeoff and Quavo on Instagram.

However, Cardi did post a cryptic message on her Twitter saying, "I should of did a screen recording of the pages I unfollowed cause now I’m trying to follow back and don’t remember the @ names.”

The act which has come without any public drama or confrontation is what has fans worried that there's trouble brewing at home.

Migos is an American hip-hop trio from Georgia. The group has been together for close to 14 years as they started rapping way back in 2008, however, their original name was Polo club.

They are not only directly related but were also raised together.

Quavo is Takeoff's uncle, and Offset is Quavo's cousin. The group has always been tight-knit since coming out with close to zero drama.

In 2012, their song “Bando” blew up and was a mega internet sensation, this greatly helped them get recognition.

In 2013, Migos released their song “Versace,” which ended up becoming a Billboard hit song and propelling them to their current stardom status.

Fellow rapper and singer, Drake hopped onto the remix of the song helping it trend further and giving Migos more airplay and attention.

Since then, the group has made four Billboard Hot 100 top 10 entries and even starred in Donald Glover's Atlanta.

The trio over the years has embraced solo projects whilst still remaining committed to their work as a group.

Cardi B reflects on 'great relationship' with Offset's children

The couple appears on the cover of the May/June 2022 issue of Essence magazine, along with their family. Cardi and Offset share daughter Kulture and ...
Entertainment
9 months ago

Kanye was banned from performing at the Grammys due to ‘concerning online behavior’,
Entertainment
10 months ago

Cardi B just broke the record for becoming the first female rapper to have three diamond certified singles.
Entertainment
1 year ago