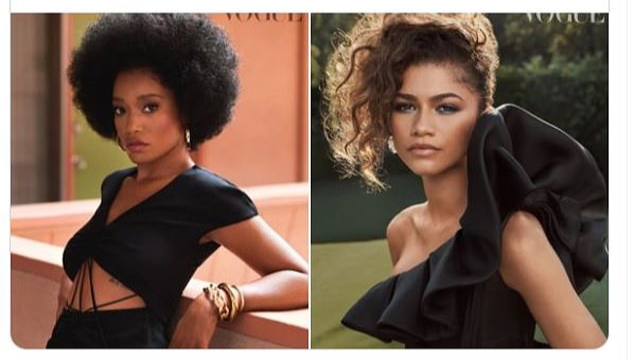 Twitter was wide awake over the weekend after one of its users pitted American actress, singer, and model Keke Palmer against fellow babe in the game Zendaya Maree Coleman.

It all began after Keke made a splash this weekend in her new movie  "Nope" in which she stars opposite Hollywood sensation David Kaalayu, which opened atop the box office with $44 million on the weekend, with some arguing that this was her breakout moment in the mainstream suggesting the role in the hit movie could elevate her star stature to that of Zendaya's.

Ironically Keke has been in the industry for years and has starred in lots of movies and TV shows but people still felt she was not a household name.

A Twitter user posted a photo of the sensational 28-year-old and voiced that she feels captioned it, " Keke Palmer deserves the same hype ya'all give Zendaya."

Other users picked on the story voicing that they feel Zendaya gets more applause and recognition because she is of a lighter complexion.

And from there several users joined in talking about why one might perhaps have ascended earlier than the other with most backing up the theory that colorism was why Zendaya has experienced more mainstream success than Keke.

Keke got wind of the debate and tweeted that she was on a level of her own and it was disrespectful trying to compare her with other people since she had hit achievements no other had.

The actress tweeted,  "A great example of colorism is to believe I can be compared to anyone. I’m the youngest talk show host ever, the first Black woman to star in her own show on Nickelodeon, & the youngest & first Black Cinderella on Broadway. I’m an incomparable talent. Baby THIS, is Keke Palmer."

She went on to add, "I’ve been a leading lady since I was 11 years old. I have over 100+ credits, and currently starring in an original screenplay that’s the number one film at the box office #NOPE. I’ve had a blessed career thus far, I couldn’t ask for more but God continues to surprise me."

Another user voiced how disappointing it was to constantly see black women pitted against each other, 'one day y’all are going to stop pitting Black women against one another."

While another wrote, 'I hate when y’all do this! Like damn, enjoy KeKe without bringing up Zendaya & vice versa. They both are shining bright right now. KeKe been that girl & everyone loves her. Now let’s celebrate her without mentioning someone else.'

Zendaya has remained silent over the whole fiasco. The two are not besties but they've been spotted in the same Hollywood circles.

And a couple of years ago Keke came out to defend Zendaya after she was given the role of a white lady (the late Aaliyah).

Zendaya and Denis Villeneuve team up for futuristic fashion shoot

The latest issue of W magazine was directed by Villeneuve and shot by photographer Jack Davison. In it, Zendaya is pictured outside a cliffside ...
Entertainment
5 months ago

Euphoria the film addresses the modern society we, especially teenagers live in.
Entertainment
6 months ago

Emmy Awards, the most prestigious honours in TV, have been announced
Trending
4 weeks ago
WATCH: For the latest videos on entertainment stories